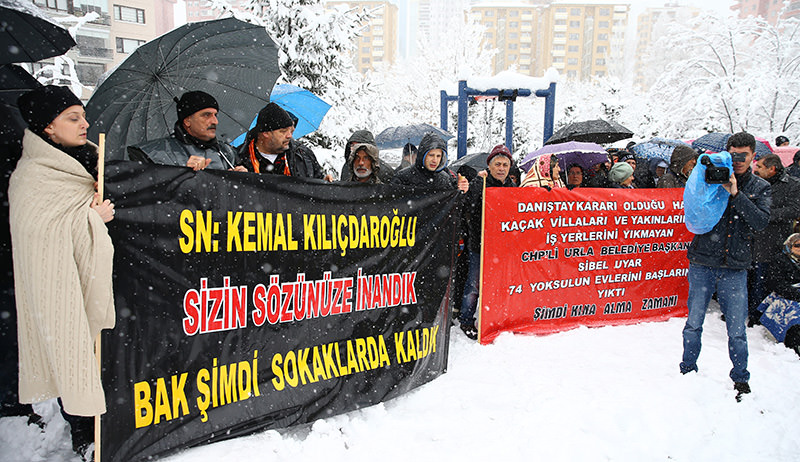 | AA Photo
by Daily Sabah Feb 07, 2016 12:00 am
A group consisting of families, whose houses were allegedly demolished by a Republican People's Party (CHP)-run municipality in southern İzmir province without a court order went in front of chairman Kemal Kılıçdaroğlu's house in Ankara on Saturday to protest the demolition and speak with him but he did not show up.

Arriving in front of Kılıçdaroğlu's house in Ankara's Balgat district, the group protested CHP's chairman, and said they regret voting for his party, as they claimed the CHP-run municipality demolished 74 houses, located in İzmir's Urla district without a court order, leaving hundreds of people on the streets.

The group carried banners saying 'Kılıçdaroğlu, we believed in your word and you left us on the streets,' while criticizing the municipality's failure to demolish unlawfully constructed villas and businesses belonging to business tycoons.

"I wish I never voted for him, he forgets about the ordinary citizens," a woman reportedly said, while others noted that they were disappointed about the municipality's actions.

The group had reportedly waited to speak with Kemal Kılıçdaroğlu but the CHP chairman did not show up to listen to their demands.

According to reports, the group is expected to camp in front of Kılıçdaroğlu's apartment building.