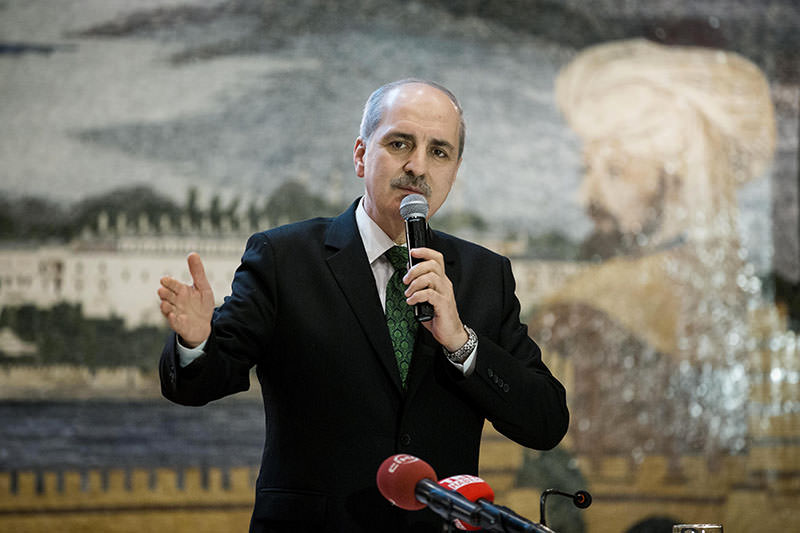 | AA photo
by Daily Sabah with Wires Feb 07, 2016 12:00 am
Turkey has reached the end of its "capacity to absorb" refugees but will continue to take them in, Deputy Prime Minister Numan Kurtulmuş said on Sunday.

The comment came as thousands of Syrians, mostly women and children, have been fleeing to the Turkish border since Friday from the northern Syrian city of Aleppo to escape a major regime offensive backed by Russian airstrikes.

Kurtulmuş told private CNN-Türk television: "If we also count Iraqis, we are faced with 3 million refugees [in Turkey], but these people do not have anywhere else to go. Either they will die in bombings, and like the whole world, Turkey too will only watch and contribute to this cruelty [in silence], or we will open our borders and accept these people."

He said Turkey was doing the latter. Some refugees were allowed entry and some others were being accommodated outside the border, with Turkey providing humanitarian aid, Kurtulmuş said. "Turkey is not in any position to say, 'don't come' to these people. We don't have such an option. Otherwise, we would be leaving almost all of these people to death," he said.

Kurtulmuş also commented on the unity of Syria, saying that Ankara is in favor of maintaining the country's territorial integrity. "We would never give consent to a partitioning of the country into regions, such as Alawite, Kurdish or Arab," he said. Such partitioning would be a "very big disaster" not only for Syria, but also the region's future, leading to a continuation of conflict, according to Kurtulmuş. "Therefore, we are in favor of Syria's integrity, as with Iraq. This is our preference," he said.

Aid trucks and ambulances from Turkey entered Syria on Sunday to deliver food and supplies to tens of thousands of people fleeing an escalating Russia-backed Syrian regime assault on Aleppo, with airstrikes targeting villages on the road to the Turkish border.

Russian and Syrian forces intensified their offensive on opposition-held areas around Aleppo that are still home to around 350,000 people and aid workers have said the city, Syria's largest before the war, could soon fall.

The Syrian Observatory for Human Rights, which monitors the war, said airstrikes thought to be from Russian planes hit around the villages of Bashkoy, Haritan and Kafr Hamra north of Aleppo on Sunday, the latter two lying near the road to Turkey.

Russia's intervention has tipped the balance of the war in favor of Syrian President Bashar Assad, reversing gains rebels made last year. Advances by the Syrian army and allied militias, including Iranian fighters, are threatening to cut off the rebel-held zones of Aleppo.

Some 35,000 civilians have arrived at Bab al-Salameh and the nearby Syrian town of Azaz, according to the U.N. Office for the Coordination of Humanitarian Affairs. Many are sleeping in the open in overnight temperatures reaching minus 4 degrees Celsius.
Last Update: Feb 07, 2016 4:46 pm
RELATED TOPICS