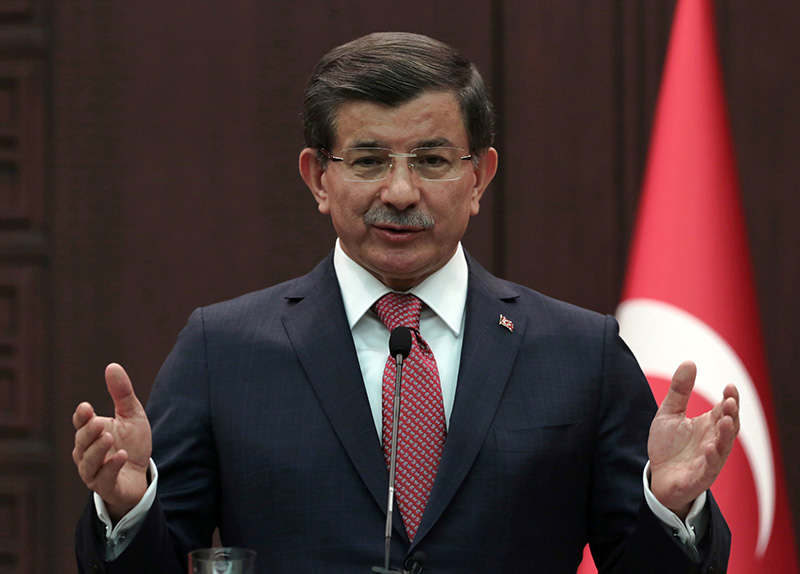 | AP Photo
by Daily Sabah Feb 09, 2016 12:00 am
Prime Minister Ahmet Davutoğlu on Tuesday criticized the Russian-backed Assad regime and said that his forces in Syria were blocking humanitarian aid by cutting off the corridor between Turkey and Aleppo saying that those living under the strikes are on the brink of a new humanitarian tragedy.

Davutoğlu made the comments during the Justice and Development Party's (AK Party) parliamentary group meeting in Ankara.

The prime minister touched upon his earlier meeting with German Chancellor Angela Merkel on Monday, saying that Turkey and Germany were the two countries shouldered the biggest burden in the Syrian refugee crisis.

Some additional 70,000 Syrian refugees could reach the Turkish border if the military campaign there continues at this intensity, Davutoğlu said, adding Turkey will not shut its doors to the refugees.

Davutoğlu said that the Syrian people are resisting the airstrikes carried out by Russia and the Assad regime, while he added that Turkey will continue to support the people of Aleppo who are seeking refuge.

Referring to the invasion of Afghanistan by the Soviet Union, Davutoğlu said that nobody should forget the way Russia left Afghanistan. "Those who invade Syria today will also leave the country in a low manner," he added.

Turkey, which is already sheltering 2.5 million Syrian refugees, has largely kept its gates closed in recent days as tens of thousands seek refuge from Syrian and Russian assaults on opposition-held territory in northwest Syria.

Speaking over the ongoing reconciliation and reconstruction efforts following the clashes in the southeast, Davutoğlu announced that the process will now be named the "Unity, Harmony and Democracy Action Plan."

He underscored the importance of public order once again and said whoever threatens it will be stopped. He continued by reassuring that citizens who have been affected by terrorism will be recompensed and the state will continue to take precautionary measures to protect citizens.

Russian and Syrian forces intensified their campaign on rebel-held areas around Aleppo that are still home to around 350,000 people and aid workers have said the city - Syria's largest before the war - could soon fall.

The Syrian Observatory for Human Rights, which monitors the war, said airstrikes, thought to be from Russian planes, hit around the villages of Bashkoy, Haritan and Kfr Hamra north of Aleppo on Sunday, the latter two lying near the road to Turkey.

Russia's intervention has tipped the balance of the war in favor of Assad, reversing gains the rebels made last year. Advances by the Syrian army and allied militias, including Iranian fighters, are threatening to cut off rebel-held zones of Aleppo.

"In some parts of Aleppo the Assad regime has cut the north-south corridor ... Turkey is under threat," President Recep Tayyip Erdoğan told reporters on his plane back from a visit to Latin America.

Turkey's armed forces had the full authority to counter any threats to its national security, he said, although senior government officials have said the NATO member does not intend to mount any unilateral incursion into Syria.
Last Update: Feb 09, 2016 5:53 pm
RELATED TOPICS