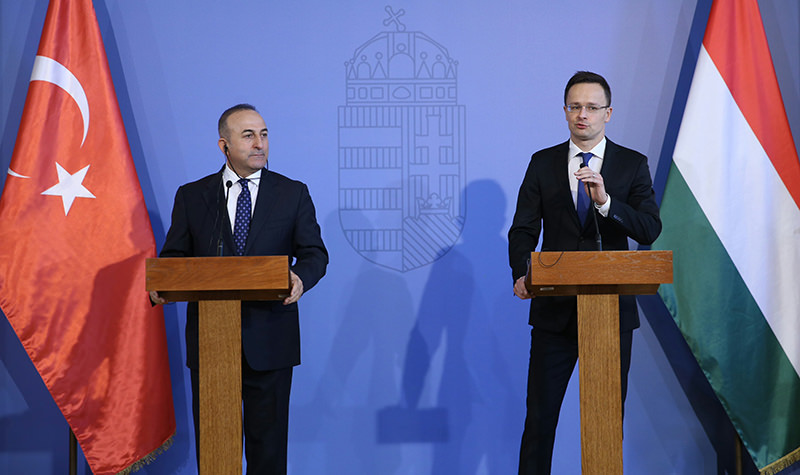 | AA Photo
by Daily Sabah with Agencies Feb 09, 2016 12:00 am
Turkey is admitting Syrian refugees in a "controlled fashion" and has so far let in 10,000 of the roughly 50,000 people who have reached its borders in the latest influx, Foreign Minister Mevlüt Çavuşoğlu said on Tuesday.

Speaking at a joint news conference with his Hungarian counterpart during a visit to Budapest, Çavuşoğlu said the current flood of refugees to Turkey could reach 1 million people if the Russian and Syrian military campaign against the opposition continues.

Çavuşoğlu also criticized the recent statements made by the U.S. State Department spokesperson John Kirby on the YPG/PYD, which the U.S. does not consider as a terrorist organization and will continue to support the militant group.

Çavuşoğlu said that Turkey finds US's PYD comments odd and wrong, and added that they need to make a decision on whose side they're on, Turkey or the militant group.

President Recep Tayyip Erdoğan, speaking over the weekend to journalists on the return flight from his 5-day Latin America visit, said the U.S. should decide who its regional partner is, Turkey or the terrorists in Syria. He added, along with the rest of the international community, the U.S. should recognize the PYD as a terrorist group.

The PYD is largely accepted as the Syrian wing of the PKK, which is recognized as a terror organization by the U.S., the E.U and NATO. Its armed wing YPG was accused by various NGO's - including the Amnesty International - of committing wide-scale human rights violations, which include ethnic cleansing, forced migration or deploying children.