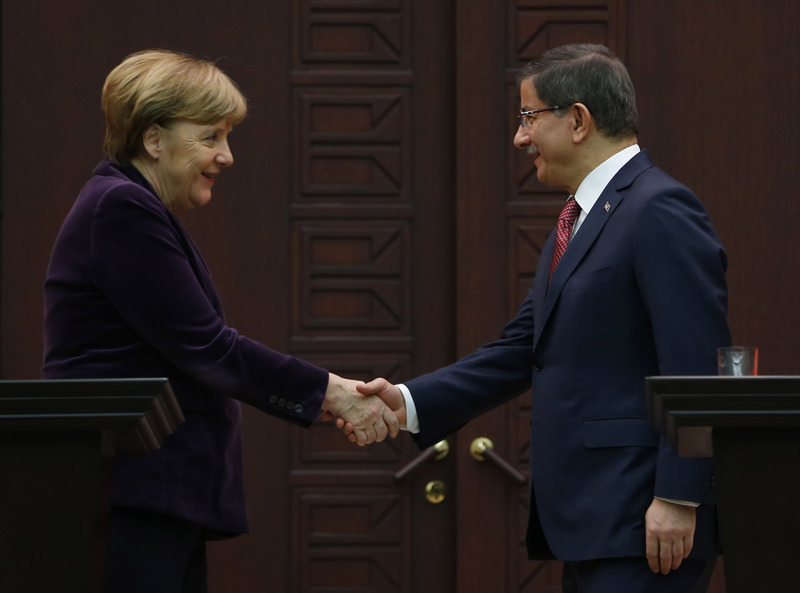 PM Davutoğlu announced a 10-step cooperation plan to deal with the refugee crisis during German Chancellor Merkel's visit to Ankara. The two leaders also stressed the necessity of NATO involvement to resolve the crisis

German Chancellor Angela Merkel arrived in Ankara Monday to hold official meetings regarding the ongoing Syrian crisis where she met President Recep Tayyip Erdoğan and Prime Minister Ahmet Davutoğlu. She and the prime minister held a joint press conference following their meeting where he underlined that the international community should not expect Turkey to shoulder the refugee burden alone just because it has an open-door policy to those seeking asylum. While both leaders stressed the significance of the crisis, Davutoğlu said that humanity is being tested in Syria, as tens of thousands of people are affected by the ongoing crisis. He said that joint efforts are necessary to deal with the issue, announcing a 10-step cooperation plan to tackle the refugee crisis. Providing further details on the official meeting, Merkel said that the two leaders agreed to carry out "joint efforts" for greater NATO involvement in the refugee crisis by seeking the use of NATO's observation capabilities on the Syrian border and in the Aegean Sea. Prime Minister Davutoğlu said that although the topic of discussion was primarily Syria and the refugee crisis, the two leaders also discussed bilateral relations.

At the press conference Davutoğlu began by saying that there are many concerning developments throughout Syria and that a new humanitarian tragedy is on the way. He said that at least 30,000 refugees fleeing Russia-backed airstrikes on Aleppo are waiting at the Turkish border. "As we always do, we will address the needs of our Syrian brothers and sisters and take them in when needed. However, just because Turkey is already taking in Syrian refugees no one can tolerate or approve the ongoing Russian airstrikes that can be described as ethnic cleansing. Again, no one should expect Turkey to shoulder the refugee burden on its own just because Turkey is already taking in Syrian refugees and accepting to address the burden."

He praised the German chancellor for her stance on addressing the crisis and reiterated that the crisis is a matter for not only Turkey but also Europe and the entire world. Thanking Merkel for her sensitivity and political will to share the burden, Davutoğlu said that humanity is being tested by the Syrian crisis. Now that the European Union has approved the 3 billion euros of funds for Ankara to cope with the Syrian refugees seeking asylum in Turkey, Davutoğlu announced that Germany and Turkey had agreed on 10 important points to take action on. Emphasizing that the matters Turkey and Germany will cooperate on will be applied in the framework of the EU's refugee action plan, he said: "The first matter we agreed on is to begin a diplomatic initiative together to encourage halting all assaults on civilians in Syria as the peace talks begin. Secondly, we agreed to aid the Syrian refugees at the border through joint cooperation between AFAD [Disaster and Emergency Management Authority] and the German Technical Aid Group."

Ministers agreed in Turkey's recently held Cabinet meeting to enhance operations against human trafficking and Davutoğlu announced that the two countries will hold joint efforts to prevent illegal entrances into the country. He said: "Both countries will work to enhance information sharing to tackle human trafficking. On Thursday, there will be a NATO Defense Ministries' Summit. [Germany and Turkey] will carry out joint efforts for further NATO involvement in the crisis through enhanced use of NATO's observation capabilities at the border with Syria and on the Aegean Sea." Another item on the agenda was making use of the 3-billion-euro fund immediately especially for education and health of Syrian refugees in Turkey. Davutoğlu announced that the director of Migration Management will travel to Greece on Thursday to discuss the steps to be taken jointly. "Until peace is restored in Syria, we have agreed to work together against the barbaric attacks. We also discussed the developments in the Balkans and the Caucasus and discussed the Cyprus talks," he added. Davutoğlu finished by saying that Germany and Turkey will work on an active mechanism to place Syrian asylum seekers.