Erdoğan asks which side the US is on: Turkey or terrorist PYD? 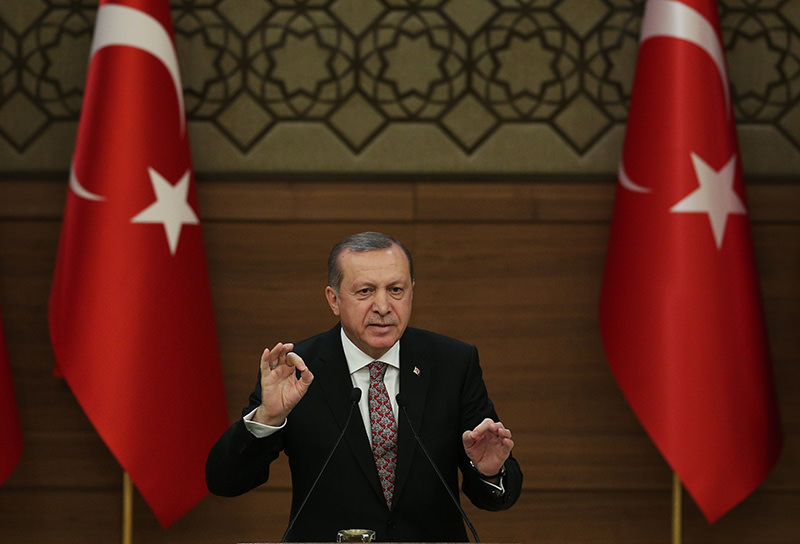 President Recep Tayyip Erdoğan on Wednesday criticized the U.S.'s latest statement that it does not recognize the Democratic Union Party (PYD) as a terror organization, saying the PYD was one of the actors that have turned Syria into a bloodbath.

"Are you on Turkey's side or the side of the PYD [ and its armed] YPG terrorist organization?" he asked in a question pointed at the U.S.

He made the comments during his weekly meeting with local headman at the Presidential Palace in Ankara.

Turkish-U.S. relations have gone south following a statement from U.S. State Department spokesman John Kirby that the U.S. does not consider the Syrian PKK affiliate Democratic Union Party (PYD) or its armed People's Protection Units (YPG) to be terrorist organizations. Kirby's statement was in response to Erdoğan's ultimatum to Washington to choose Turkey or the PYD as its ally.

Even though Ankara repeatedly warned the U.S. and Europe that there are no good or bad terrorists, pointing to the YPG, the U.S. disregarded Erdoğan's last call and designated the YPG its "partner."

"Syrian Kurds are our partners against DAESH," Kirby said on Monday, stoking the flames of a rift between Ankara and Washington.

Erdoğan again emphasized on Wednesday that the PYD, just like the PKK, is a terror organization. He said that it was impossible to understand what kind of cooperation the U.S. had with Turkey.

Speaking to Turkish journalists accompanying him while he was in Chile during his five-day visit to South America, Erdoğan accused the EU of insincerity when the PKK and its affiliates are concerned. He said: "They are constantly inviting PKK members to speak at the European Council and other bodies. They tell us that they see the PKK as a terrorist group but then invite them to speak."

"We had warned the West not to give arms to the PYD before. Half of the weapons went to DAESH and the other half to the PYD. What were they saying? The PYD and its armed YPG [People's Protection Units] are fighting against DAESH. At the time, we told them that Russia did so, too. Will that make us see Russians in a positive light? The West committed grave mistakes with the PYD. They discriminate among terrorists. Some are good and others are bad, they argue. We need to establish clear concepts about terrorism," he said.

Ankara considers the PYD to be a terrorist organization, citing its ties to the PKK, which has carried out a three-decade insurgency in Turkey's mainly Kurdish southeast.

On Wednesday Erdoğan also criticized the U.N.'s latest call to Turkey to open its border for the new influx of Syrian refugees trying to escape the town of Aleppo following Syrian regime and Russian airstrikes. The U.N. said that this call was in line with its international obligations to protect people fleeing conflict or persecution.

Erdoğan, however, criticized the U.N., saying that the organization had only provided Turkey with $455 million in funding for refugees whereas Ankara has already spent $10 billion on this crisis. He said that the situation in Syria has become a domestic security issue for Turkey.

"You're asking us to open borders to the latest influx of Syrian refugees, but what have you done up until now?" Erdoğan asked.

During his speech, the president has also touched upon the inner-party row the main opposition Republican's People Party (CHP) was having in the recent week. He said, "The world is boiling, Turkey is broiling but the [Turkey's] opposition is busy over who took down a picture frame."

On Sunday, the CHP Assembly met in an extraordinary session and took a decision to send deputy Aylin Nazlıaka to the party's disciplinary committee for dismissal because of her public remarks that a CHP deputy had taken down a portrait of Mustafa Kemal Atatürk, the founder of the Republic of Turkey, from their office wall at Parliament.

It is a convention for every deputy to have such a portrait hung in their offices. These tensions had recently opened a question about whether Kılıçdaroğlu's administration had abandoned the fundamental principles of the CHP.

The CHP issued a statement following its decision on Sunday stating, "It has been decided that Ankara deputy and Party Assembly member Aylin Nazlıaka, who led to CHP being debated in public opinion by making unsubstantiated and false claims that a CHP deputy took down a portrait of Mustafa Kemal Atatürk in their parliament room, is referred to disciplinary committee for her dismissal within the party's 68/A, F, and 70/A-a-b numbered decrees in its law."