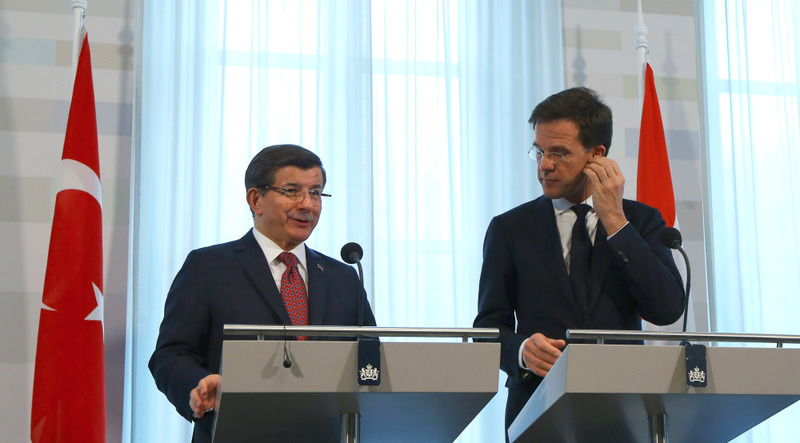 by Daily Sabah with AA Feb 11, 2016 12:00 am
Turkey will take the same measures as in Iraq if a threat from the PKK-affiliated the Democratic Union Party (PYD) in Syria is aimed at the country's national security, Prime Minister Ahmet Davutoğlu said.

Speaking in a joint press statement with Netherlands Prime Minister Mark Rutte in Lahey on Wednesday, Prime Minister Ahmet Davutoğlu said discriminating between terrorists organizations is as dangerous as terror itself and stressed that saying the Democratic Union Party (PYD) is not a terrorist organization shows an ignorance of the reality in the Middle East. "The PYD is in cooperation with Russia and attacks civilians, committing war crimes," he said, adding Washington's clarification of its stance on the PYD is Turkey's right.

Davutoğlu also implied targeted strikes on the PYD if it threatens Turkey from beyond the Syrian border, saying, "In the event of the emergence of a threat directed towards Turkey, we will take the same measures in Syria as we did in Iraq."

Previously Ankara summoned U.S. Ambassador John Bass to the Foreign Ministry on Tuesday over the State Department spokesman's remarks on "not considering the PYD [Democratic Union Party] and the YPG [People's Protection Units] as terrorists."

Turkish-U.S. relations have gone south following the statement from U.S. State Department spokesman John Kirby that the U.S. does not consider the Syrian PKK affiliate PYD's armed YPG to be a terrorist organization. Kirby's statement was in response to President Recep Tayyip Erdoğan's ultimatum to Washington to choose either Turkey or the PYD as its ally.

Even though Ankara repeatedly warned the U.S. and Europe that there cannot be any good or bad terrorists, pointing to the YPG, the U.S. disregarded Erdoğan's latest call and designated the YPG as its "partner."

Furthermore, statements reiterating the current position towards the YPG continues to be voiced from Washington.

"Nothing has changed about our policy on that," State Department spokesman Kirby told reporters during a press briefing on Tuesday, but added that the U.S. considers the PKK a foreign terrorist organization.

"Everybody who's contributing in the fight against DAESH has a role to play or sometimes many roles to play. And we're going to continue to have discussions with everybody about how we can all put the proper amount of intensified pressure on this group [DAESH]."
Last Update: Feb 11, 2016 12:41 pm
RELATED TOPICS