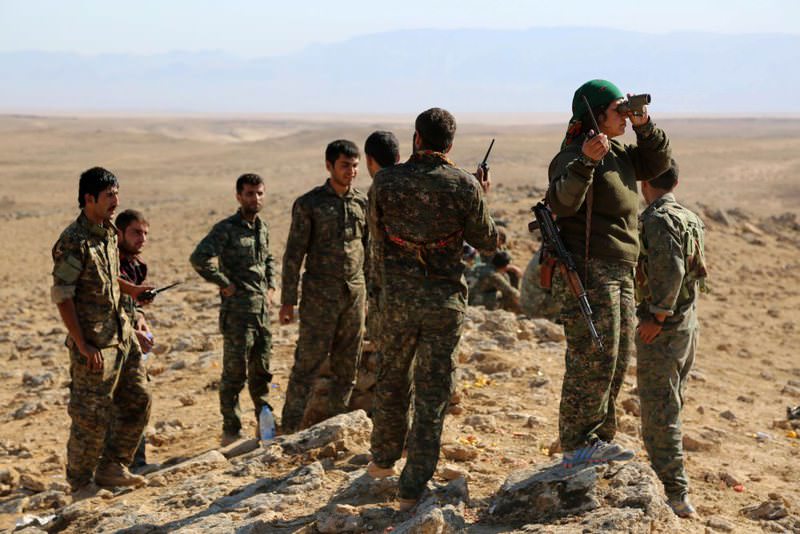 A group of YPG militants monitoring the area in al-Hol in Syria's Hasakah province last year.
by Associated Press Feb 11, 2016 12:00 am

Backed by Russian airstrikes, the PYD started an offensive to capture an air base controlled by the moderate opposition forces in northern Aleppo. Opposition groups blame the PYD of trying to take predominantly-Arab villages near the PYD-controlled Afrin canton

PKK-linked Democratic Union Party (PYD) fighters backed by Russian airstrikes launched an attack in northern Syria yesterday in an attempt to capture a military air base held by Syrian opposition groups, while an international aid group warned that the health system is close to collapse in parts of northern Syria.

With Syrian troops also backed by Russian warplanes waging a major offensive between the northern city of Aleppo and the Turkish border, the Kurds appeared to be exploiting the chaos to expand their nearby enclave, known as Afrin.

Maj. Yasser Abdul-Rahim, a rebel commander in Aleppo province, told The Associated Press that fighters from the Kurdish People's Protection Units (YPG) are clashing with opposition groups near Mannagh air base. He also accused the YPG of trying to take Arab villages near Afrin. "We are fighting on three fronts," he said via Skype, referring to the YPG, Syrian troops and DAESH, which also controls parts of Aleppo province. He warned that Mannagh air base could fall to PYD fighters because of the Russian air cover and the intensity of the attack.

The Britain-based Syrian Observatory for Human Rights also said YPG fighters are trying to capture the former Syrian air base, which fell to the opposition in August 2013.

Ahmad al-Ahmad, an opposition activist based in Aleppo province, said the fighting is concentrated outside the air base and that Russian warplanes are bombarding the area. He said that YPG fighters are also trying to push their way toward the nearby village of Kfar Naya. "The front in northern Aleppo is in flames," he said via Skype.

PYD forces in Afrin could not immediately be reached for comment.

Doctors Without Borders said military operations in Aleppo province have brought "the already devastated health system" close to collapse in the Azaz district, some 10 kilometers from the Turkish border.

The group, also known as MSF, warned that any escalation would worsen the humanitarian crisis in the northern region, which has already sent tens of thousands of people fleeing toward the border with Turkey.

It said several hospitals and smaller health facilities in Azaz and around the city of Aleppo have been hit by airstrikes in the last two weeks, including at least three MSF-supported hospitals. MSF said attacks "on the few remaining functional medical facilities must stop immediately. Fighting and bombing campaigns in heavily populated areas must be halted, at the very least until civilians can flee to secure areas with access to basic services."

The observatory's chief, Rami Abdurrahman, said that since the offensive in Aleppo province began on Feb. 1, some 518 people have been killed, including 101 civilians, 169 insurgents and 143 troops and pro-government forces.

Troops have captured dozens of villages in the area and were able to lift a three-year siege on two Shiite villages in Aleppo province last week.

In London, meanwhile, top Syrian opposition figure Riad Hijab said the opposition would not attend a scheduled round of indirect peace talks in Geneva on Feb. 25 unless the Russian-Syrian bombardment stops, sieges on rebel-held areas are lifted and detainees are freed. Earlier in the day, Syrian state news agency SANA said opposition gunmen opened fire on aid vehicles in the besieged rebel-held town of Madaya, near the capital, Damascus, but no casualties were reported.

SANA said the shooting occurred late Tuesday night, delaying operations for several hours. An official with the Syrian Arab Red Crescent (SARC) said the convoy, which included vehicles from the SARC and the International Committee of the Red Cross, was evacuating sick people from Madaya when it came under fire by unknown gunmen. The official, who spoke on condition of anonymity in line with regulations, said the operation had been completed and the people were successfully evacuated.

Madaya, which has been besieged by government forces and allied militiamen for months, gained international attention after harrowing pictures emerged showing emaciated children and starving residents.

Syria's conflict has killed more than 250,000 people and displaced millions since the uprising began in March 2011.
RELATED TOPICS