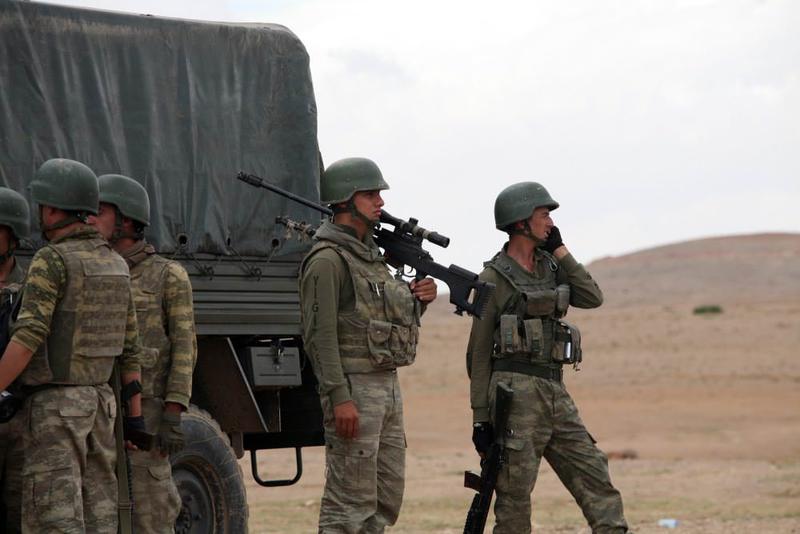 While the Obama administration stays quiet over the Russia-backed Assad regime indiscriminately attacking opposition, held regions, Turkey's proposal of creating a safe-zone in northern Syria has started the see more support in the international community

Turkey has requested from the U.N. safe zones in Syria since 2012, but could not find the necessary international support and Russia, the staunchest ally of the regime of Syria's Bashar Assad, has vetoed all draft proposals at the U.N. Security Council envisaging any military measures on the administration. Now in 2016, the deadlock in the war-torn country has been brought to a new level by Moscow's heavy bombardment on opposition areas and the United States' silence over atrocities committed by the regime and its allies.

At first, Ankara found few supporters to its proposal for a safe zone and France was one of the strongest bakers of the idea, which could prevent tens of thousands of people getting killed in airstrikes and stop DEASH militants increasing their influence in the country. Also, the European countries would not currently be facing the biggest refugee crisis to rock the continent since World War II.

As the Syrian opposition, which the Obama administration and other Western powers abandoned in the past year, is stuck between the attacks from the Russia-backed regime, DAESH and PKK-affiliate People's Protection Units (YPG) in Aleppo and other northern parts of the country, more international circles started to raise their voice for establishing a safe-zone in northern parts of the country.

The benefits of a safe zone are manifold

In their opinion piece for the Washington Post, Harvard University's Nicholas Burns and former U.S. Ambassador to Iraq James Jeffrey, said: "President Obama can no longer avoid providing stronger American leadership to reverse this tidal wave of suffering and violence in the Levant. … We believe the Obama team will have to reconsider what it has rejected in the past: the creation of a safe zone in northern Syria to protect civilians, along with a no-fly zone to enforce it."

While the U.S. military has the experience to create such a zone, one option could be to locate it over 25 to 30 miles south of the Turkish border and the White House could press Russia, as a permanent member of the U.N. Security Council, to help organize and protect the zone, they said.

"The benefits of a safe zone are manifold. It would be the most effective way to support Syrian civilians and to diminish the flow of refugees to neighboring countries and Europe. It would strengthen our ability to work closely with our key regional NATO ally, Turkey, which has long advocated this step. For the first time, it would restrict the operations of the rampaging Syrian air force — the largest killer of civilians in the conflict. It would also hinder the use of military power by Russia, Iran and Hezbollah against the resistance. Once a zone were established, we do not believe Russia would challenge the stronger U.S. and NATO forces, particularly if they were operating mainly from Turkey," the two stated.

If the US retreats further, it will have betrayed the Syrian people

In its editorial, titled "Syrian civil war: US must tip the balance towards the moderates," The Independent said, "The US has played into Mr. Assad's hands. With a view to de-escalating conflict, the White House eased support for the rebels ahead of Geneva and pressurised Gulf nations to slow arms deliveries. This exposed the moderates to an onslaught from which they may not recover."

"Mr. Obama should seriously consider the offer of ground troops from Saudi Arabia and the UAE. He should establish a no-fly zone to protect as many civilians as possible," the editorial said, adding that if the U.S. retreats further, "it will have betrayed the Syrian people, and turned its back as the humanitarian catastrophe enters what may be its darkest phase."

Aleppo may prove to be the Sarajevo of Syria

"The troubling thing is that the Putin policy on Syria has become hard to distinguish from the Obama policy." Roger Cohen said in his opinion column for The New York Times.

"Aleppo may prove to be the Sarajevo of Syria. It is already the Munich. By which I mean that the city's plight today — its exposure to Putin's whims and a revived Assad's pitiless designs — is a result of the fecklessness and purposelessness over almost five years of the Obama administration," he said in his criticisms for the Obama administration, and added that "it is too late, as well as pure illusion, to expect significant change in Obama's Syria policy."

Former NATO Ambassador: US should create a Syria safe zone

The dire humanitarian situation is cause enough for the US to create a safe zone along the Turkey-Syria border including boots on the ground according to Nicholas Burns, former U.S. ambassador to NATO and former undersecretary of state. He told the BBC's Katty Kay that "the U.S. is not leading with a strategic purpose and the West needs to do more to help."

No-fly zones and safe havens in areas in the north and south of Syria must be considered if Russia and the Syrian government refuse to lift sieges of starving towns and cities, two former British international development secretaries have said. Clare Short, Labour international development secretary until 2003, and Andrew Mitchell, aid secretary in David Cameron's first government, made their appeal as the Syrian peace talks in Geneva heard calls for the sieges to be lifted and for aid convoys to be given unfettered access.

Speaking on BBC Radio 4's Today program, Mitchell said there had been a lull in the discussion about safe havens due to the Russian intervention. "The political track is taking a very long time and safe havens run and policed by the United Nations are required," he said.
Last Update: Feb 11, 2016 12:43 pm
RELATED TOPICS