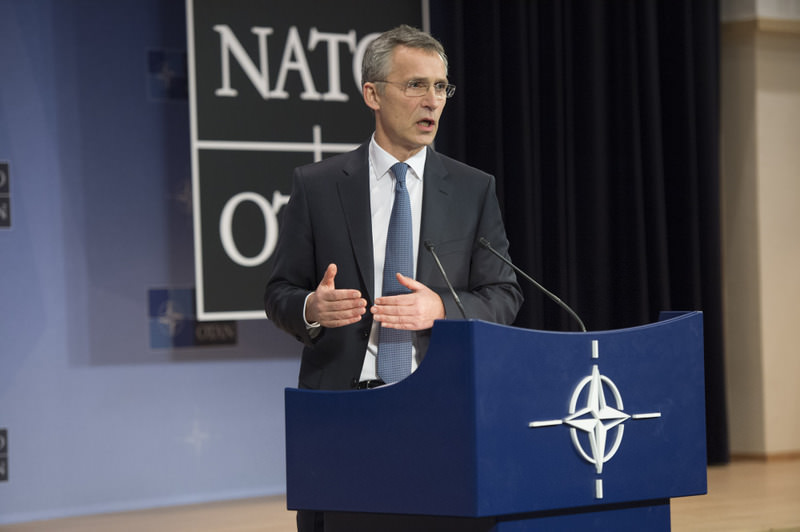 NATO has agreed on bolstering Turkey's defense through Patriots, AWACS aircraft and maritime presence in the Mediterranean and Black Seas, NATO Secretary-General Jens Stoltenberg said on Wednesday. Speaking after a meeting of NATO defense ministers in Brussels, Stoltenberg said they have witnessed the tangible military presence of Moscow last month in Syria and the Eastern Mediterranean, "changing the strategic balance," referring to the violation of Turkish airspace by Russian jets. "Let me add that NATO already has different capabilities and assets in the region. In December, NATO agreed on a tailored package of assurance measures for Turkey, which includes AWACS surveillance planes, air policing, maritime patrol aircraft, increased naval presence in the Mediterranean and actually, Germany now has the command of this NATO naval group, and also other assets," he said. The NATO force of reconnaissance planes, which includes German personnel, will be sent to aid Turkish police at the Syrian border. Though the mission involves sending German troops abroad, the government said it has no plans to consult the Bundestag, Germany's lower house of parliament. The defense ministry noted the deployment was aimed at carrying out airspace surveillance and not armed operations.

NATO is planning a temporary transfer of AWACS aircraft from the base in Geilenkirchen in western Germany to the base near Konya in central Turkey, Germany's defense ministry wrote in a Dec. 18 letter, which was revealed on Sunday. Germany contributes about 30 percent of the NATO personnel serving aboard the 17 Boeing E-3A Sentry AWACS planes in Geilenkirchen, according to the letter to the Bundestag's defense committee.

Stoltenberg has also touched upon Russian offensives in Syria. Indicating that Russia's targeting of moderate opposition in and around Aleppo has caused an increasing flow of fleeing people, Stoltenberg said, "The important thing now is that we need to support all efforts to find a political negotiated solution, and the problem with the Russian bombing is that it is undermining the efforts to find a political negotiated solution."

Backed by Russian assaults, the Syrian army and its allies made significant advances against insurgents in the northern province of Aleppo in recent days. More than 100,000 civilians have fled from Russian strikes on Aleppo, and the flood of refugees is now reaching Turkey's southern border province of Kilis.

Stoltenberg stressed that the failure in Geneva talks were to a certain extent due to Russian bombing and said, "So what we need now is calm, de-escalation and increased efforts to resume the negotiations, and to find a political negotiated peaceful solution to the crisis in Syria. That's not easy, but that's the only way forward."

According to statements given by a NATO official to Daily Sabah on Feb. 1, NATO is in the process of increasing the military hardware deployed for the defense of Turkey, especially after the second violation of Turkish airspace by Russian jets in two months.

The violation of Turkish airspace by a Russian Su-34 jet, which occurred on Jan. 29, and was addressed by Foreign Minister Mevlüt Çavuşoğlu in a statement on Jan. 30, has further exacerbated tensions in the Middle East, prompting NATO to improve its defense plans in the region.

After the tension-increasing event, Stoltenberg said, "I call on Russia to act responsibly and to fully respect NATO airspace. Russia must take all the necessary measures to ensure that such violations do not happen again. Previous incidents have shown how dangerous such behavior is." As he did in the November crisis, Stoltenberg again called for "calm and de-escalation," welcoming contacts between Ankara and Moscow. At the same time, he made it absolutely clear that NATO would stand by Turkey, the second largest military power in the alliance after the United States. "NATO stands in solidarity with Turkey and supports the territorial integrity of our ally, Turkey."

Syrian forces previously shot down a Turkish RF-4E Phantom, an unarmed reconnaissance version of an F4 fighter jet, which according to Ankara, was on a solo mission to test Turkey's domestic radar systems when it was hit in international airspace after briefly entering Syrian airspace on June 22, 2012. The Netherlands, Germany and the United States had each sent Patriot missile batteries and soldiers to Turkey in early 2013, after Ankara called for aid to defend itself against attacks from Syria on its southern border.

Ending a three-year mandate in Turkey, almost all NATO members with the exception of Spain withdrew their Patriot missile systems from Turkey, and NATO has agreed to keep Spanish Patriot missile batteries in the southern province of Adana for another year, to protect Turkey from potential threats from neighboring Syria. Other Patriot systems, which were located in Şanlıurfa and Gaziantep, were withdrawn. Some link the withdrawal of the Patriot missile defense systems from Turkey to Russia to acting more freely in the region.
RELATED TOPICS