If PYD poses threat against Turkey, we’ll strike them as we did Qandil: PM Davutoğlu 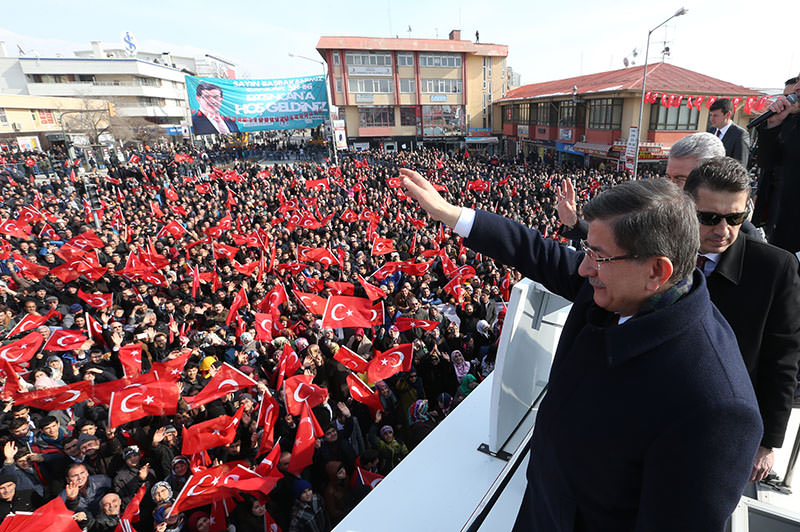 | AA photo
by Daily Sabah Feb 13, 2016 12:00 am
If the the Syrian Democratic Union Party (PYD), which is regarded as a terrorist organization by Ankara, poses a threat against Turkey, the Turkish army will strike them, Prime Minister Ahmet Davutoğlu said on Saturday.

The PYD has been attacking Syrian citizens of Arab and Kurdish origin who do not share the same views, the PM said, adding that this was well-documented.

"Those who say PYD is not a terrorist organization either do not know the region, or have ill intentions," Davutoğlu said, criticizing the U.S.'s recent statement that it does not recognize the group as a terror organization.

"The terror organization PYD is in cooperation with Russia and Assad, and is attacking Turkmens [in Syria]. If there is a threat against Turkey, we will strike PYD like we did Qandil [PKK's HQ located in Iraq]," Davutoğlu said.

"And during this process, we would like to see our allies stand on our side."

PYD has been undertaking an ethnic massacre and committing war crimes in Syria, PM Davutoğlu emphasized during Saturday's speech.

"The documents are all in the open. The international organizations have also documented these. We are expecting the U.S., whom we believe to be our ally, to show an explicit and clear stance against this inhumane massacre," Davutoğlu said.

A report released by the London-based Syrian Network for Human Rights (SNHR) in January said that the PYD has committed significant human rights violations in north and northeastern Syria, including "ethnic cleansing massacres," since the withdrawal of Assad forces in 2012.

Since taking over remote regions of northern and northeastern Syria from Daesh, the PYD and the Kurdish Self-Management (KSM) forces committed major human rights violations, including extrajudicial killings, enforced displacement, arbitrary arrests and disappearances along with other violations against women, children and media personnel, according to the report.

The report further said the PYD has sought to ethnically cleanse towns under its control that were mostly inhabited by Arabs.

The PYD is the Syrian affiliate of the PKK, which is listed as a terrorist organization by Turkey, the EU and the United States.
Last Update: Feb 13, 2016 5:26 pm
RELATED TOPICS