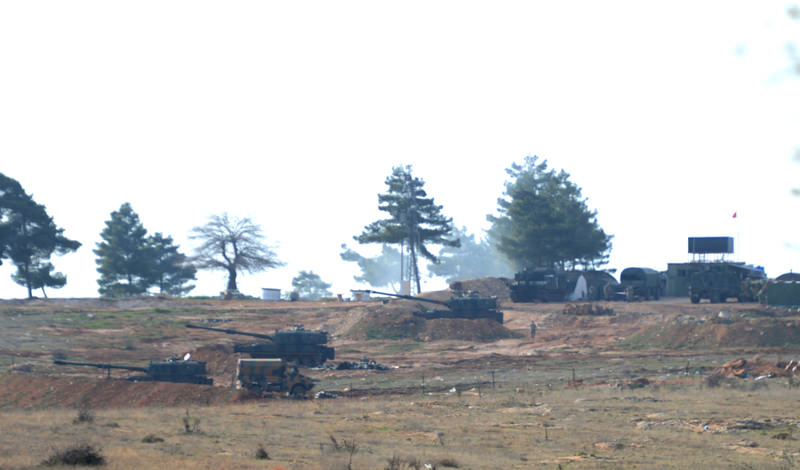 Ankara warned the PYD many times over its hostile attitude to Turkey, including its plans to form a state along the Turkish border and providing the PKK terrorist organization with arms and manpower. Ankara's unheeded warnings turned into action on Saturday and Sunday with the Turkish Army shelling YPG positions in northern Syria

The Turkish Army started to shell the PKK-affiliated Democratic Union Party's (PYD) armed People's Protection Units (YPG) in Syria on Saturday following Ankara's unheeded warnings about the YPG's hostile attitude toward Turkey. The PYD has been supplying arms and manpower to the PKK and has plans to form a de facto state along the Turkish border, which Ankara considers an existential threat to Turkey's national security. Turkish authorities had earlier hinted at the possibility of such an anti-YPG offensive, which the army began on Saturday, targeting YPG positions throughout the day. Reports indicate that the shelling continued on Sunday. Eyewitnesses on Sunday said the shelling had killed 29 YPG militants. Asserting that the shelling was carried out in line with Turkey's rules of engagement, in an address in Erzincan province on Saturday, Prime Minister Ahmet Davutoğlu said: "Forces that pose a threat [to Turkey's national security] in Azaz and surrounds were retaliated against within the framework of the rules of engagement."

Addressing the YPG, Davutoğlu said: "The YPG will move away from Azaz at once. It will not even come close." He also made Ankara's stance clear, saying that the YPG should not dare use the Menagh military airport. "It [the YPG] will leave the air base," he added.

In response to Davutoğlu's message to the YPG, PYD Co-Chair Salih Muslim reportedly told Reuters that his organization will not agree to Ankara's demands and will "resist against" Turkey. Muslim's statement points to a possible continuation of Turkey shelling YPG positions.

Deputy Prime Minister Yalçın Akdoğan also commented on the shelling on Sunday, and said that Turkey will protect its national security and is determined to respond to attacks, be they from DAESH or the PYD.

Speaking on Turkish broadcaster Kanal7, Akdoğan said that this was not the first time that Turkey launched an attack.

Akdoğan said that Ankara had previously set the YPG passing west of the Euphrates as a red line that it would not abide, and added that the YPG attack on Tal Rifaat poses a security threat as it resulted in tens of thousands of people seeking refuge in Turkey.

Ankara says that the PYD and YPG's close links with the PKK pose a threat to Turkey's national security. The PYD, as the Syrian integration of the PKK terrorist organization, has been taken as a partner by the West despite Ankara's concerns. Speaking to Daily Sabah, Kurtuluş Tayiz, a columnist for the Akşam daily, said the PYD was formed by the PKK. "Saying the PYD is affiliated with the PKK misleads us. The PYD was formed by the PKK and it is a branch under the same umbrella," he said.

Tayiz said that the PYD is one of the organizations under the Kurdish Communities Union (KCK) together with the PKK in Turkey, Party of Free Life of Kurdistan (PJAK) in Iran and the Kurdistan Democratic Solution Party (PÇDK) in Iraq.

Explaining that Ankara at first did not want to get tangled up in a military conflict with the PYD, Tayiz said: "Ankara had to take military action against the PYD. The PYD takes orders from the PKK."

Tayiz also said that the West treats the PYD as its partner because "it cannot openly support the PKK." When asked about what Ankara should do in order to explain the cause behind its actions, Tayiz said: "The West supports the PYD not because Turkey cannot explain its reasons well, but because the West wants to use the Kurdish card."

While the YPG is supported by the West because of its effective fight against DAESH, the YPG also fights moderate opposition forces that also fight DAESH. Keeping silent over the YPG's destructive offensive on opposition forces also frustrates Ankara.

Erem Şentürk, a columnist for the Diriliş Postası daily, also spoke to Daily Sabah and called the PYD an invader in Kobani that repeatedly pledged allegiance to the KCK. "There is no proof that the YPG fights DAESH. The YPG was portrayed as battling DAESH with the Kobani theater," Şentürk said.

Şentürk contends that the YPG was given the order to attack moderate opposition forces after it became clear to the international community that it does not fight DAESH. "There are only two radical groups among the opposition forces, which is a fact that Turkey also acknowledged. The rest is completely moderate," he said.

Calling the Syrian Democratic Forces (SDF) a "farce," Şentürk said it consists of PKK terrorists. "Ninety percent of SDF militants are PKK terrorists. There is no FSA militia inside the SDF," he said.

Claiming that DAESH, Syrian leader Bashar Assad's regime and the PYD work in collaboration, Şentürk asserted that the only force that fights DAESH and harms it is the moderate opposition forces.

Even though President Recep Tayyip Erdoğan gave a clear ultimatum to Washington to decide whether it chooses the PYD or Turkey as its ally, Washington did not pay much attention to it. U.S. State Department spokesman John Kirby said the U.S. "does not consider the PYD as terrorists." Ankara says that referring to the PYD as a "strong partner" while Turkey remains a significant NATO ally is considered a blurry move by the U.S.

Following Turkey's shelling of YPG positions, Kirby urged the YPG on Saturday to avoid exploiting the chaotic situation in Syria to obtain control over new areas. "We are concerned about the situation north of Aleppo and are working to de-escalate tensions on all sides,'' Kirby said.

Speaking to Daily Sabah on the issue, İlter Turan, a professor of international relations and former rector of Istanbul Bilgi University, said he retains his poised stance on Turkey's military action against YPG positions from across the border. "Shelling YPG targets from across the border will not be effective," Turan said.

Turan called Turkey's shelling a limited and uncertain move. Recalling Muslim's statement that the PYD will not consider Ankara's demands, Turan said: "The PYD is confident thanks to the U.S. The PYD wants to retain its power at the negotiating table."

When asked about whether the U.S. keeps a foot in both camps amid the rift with Ankara over the PYD, Turan said: "The U.S. has only one position and it is clear. It keeps the PYD as its partner in the fight against DAESH and also stays allies with Ankara."

Turan also said a possible move by Ankara to send ground troops into Syria without air support would fail and that Russia would possibly challenge a Turkish air campaign in the country.
RELATED TOPICS