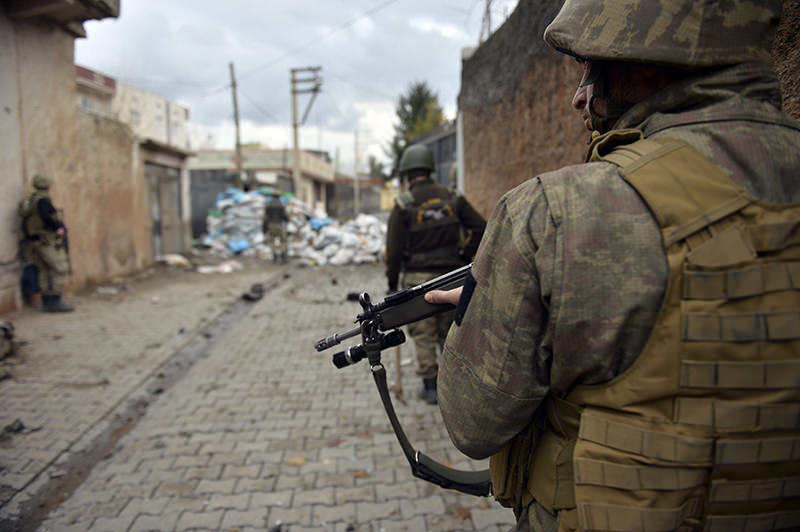 | AA Photo
by Daily Sabah with Reuters Feb 16, 2016 12:00 am
Istanbul-based A&G research company President Adil Gür announced the results of a a recent survey which showed that more than two-thirds of the population supported a possible cross-border operation as well as the continuation of operations against PKK targets.

According to the survey, 61% of participants supported a possible Turkish cross-border operation into Syria against the YPG or Daesh, both recognized as terrorist organizations by Turkey . A possible ground operation was brought to the agenda of the government after the YPG pushed through opposition lines and captured more territory near the Turkish border, and carried out attacks on a military base.

Turkey has been gravely concerned by the moves of the YPG on Azaz, claiming that the group is engaged in an ethnic cleansing against Arabs and Turkmens in the region in cooperation with the Assad regime.

Turkey accuses the YPG as being the Syrian branch of the PKK, which has waged a terrorist war against the state since it took up arms in 1984.

The survey also showed that 60% of the public was supportive of the ongoing operations against PKK terrorists in the country's southeast.

In addition, the survey also revealed that 61% of Turkey was still against a coalition and favored a single-party government instead.

Speaking on Tuesday on the matter of an operation into Syria, Foreign Minister Mevlüt Çavuşoğlu stated that it would be unrealistic for Turkey, Saudi Arabia and Qatar to conduct ground operations in Syria alone.

Underlining that Turkey, Saudi Arabia and some European allies want a ground operation in Syria, the FM said that there was no consensus in the coalition or a strategy planned for such an incursion.

"If such an operation is to take place, it has to be carried out jointly, like the (coalition) air strikes," he said.

"The coalition has not given this ground operation issue serious debate. There were opponents, and there were those who weren't going to take part but expressed a desire for Turkey or another country doing it," he said.