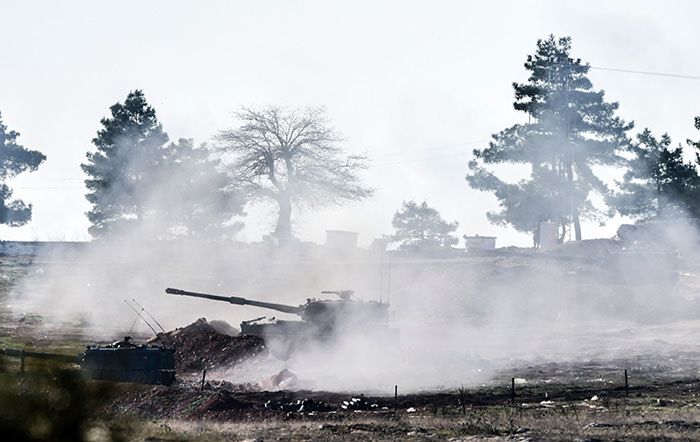 by Daily Sabah with Agencies Feb 16, 2016 12:00 am
The Turkish military has returned fire "in kind" into Syria, military sources said on Tuesday, marking the fourth straight day of shelling by Turkey.

Turkey on Monday warned YPG and PYD militants in northern Syria they would face the "harshest reaction" if they tried to capture a town near the Turkish border.

Over the past week, Syrian troops have been on the offensive in the country's north under the cover of Russian airstrikes. The ground offensive has been focused on the northern province of Aleppo while Monday's airstrike struck a clinic in the nearby Idlib province.

Turkey's foreign ministry on Monday said that Russia's airstrikes on hospitals and schools in Syria constitute war crimes and strongly condemned the attacks.

Russian airstrikes hit a hospital supported by Doctors Without Borders (MSF) in Syria on Monday, killing nine people including a child, the Syrian Observatory for Human Rights said.

The statement released by the ministry said that over 30 innocent civilians, including women and children have been killed by the attacks, while over 100 people have been injured.

The ministry said that the attacks clearly constitute war crimes according to international law, and deepen the crisis in Syria, while urging Russia to immediately stop such attacks to prevent a greater catastrophe.

The United Nations and Washington also condemned airstrikes on medical facilities and schools in Syria that the world body said killed almost 50 civilians, with the U.S. implicating Russia.

The PYD is the Syrian affiliate of the PKK, which is listed as a terror group by Turkey, the U.S. and EU and has waged war against Turkey since 1984.

Located six kilometers (four miles) south of the Turkish border, Azaz has been the scene of recent heavy fighting as the PYD has advanced during a Russian-backed Syrian regime offensive against opposition forces.
Last Update: Feb 16, 2016 12:09 pm
RELATED TOPICS