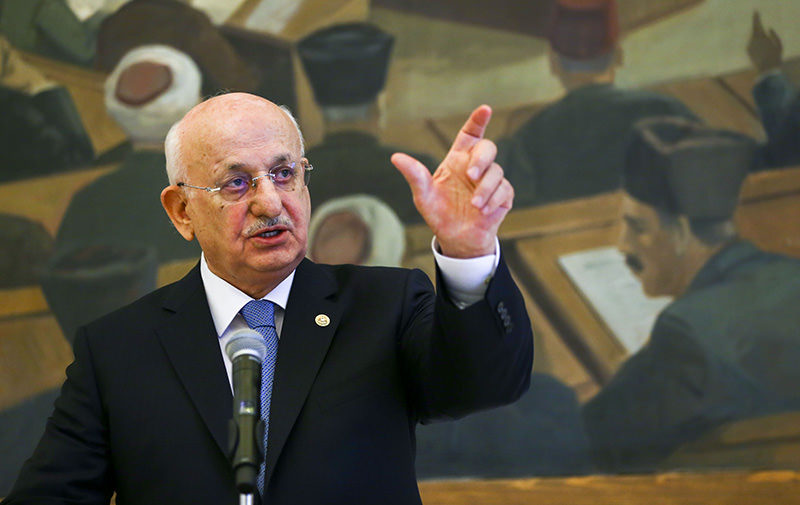 | AA photo
by Daily Sabah with AA Feb 17, 2016 12:00 am
Parliament Speaker İsmail Kahraman held a press conference on Wednesday and called on party leaders in Parliament to cooperate in forming a new constitution after the main opposition Republican People's Party (CHP) announced on Tuesday that they were leaving the Constitution Conciliation Committee.

Kahraman said that he is hopeful that a new constitution can be established in the shortest amount of time with the remaining three parties on the committee working on it.

Regarding the development, Prime Minister Ahmet Davutoğlu said on Wednesday that the AK Party would continue work on a new constitution.

"The main opposition announced it won't participate in work on a new constitution because they're unwilling to bring issues such as an executive presidency to the table," Davutoğlu said in the opening speech at a meeting of the Supreme Council for Science and Technology (SCST) in Ankara.

"We will continue to be at the table. ... It is our duty to compromise on a new constitution without any prerequisites. ... I call on all opposition parties to be at the table to be able to discuss any issue," he said.

Garo Paylan from the pro-Kurdish Peoples' Democratic Party (HDP) said the three opposition parties at the committee defended the parliamentary system, which the AK Party wants to swap for a presidential regime.

He said: "The table dissolved when the CHP said it would discuss nothing but the parliamentary system."

A Nationalist Movement Party (MHP) committee member told Reuters that they will not be participating in the committee if the CHP is not a part of it.

Last week the Constitution Conciliation Committee held its second meeting in which representatives from the four parties agreed to take decisions through reaching consensus.

The Constitution Conciliation Committee has 12 deputies – three from each of the four parties in Parliament – who first met on Feb. 3 in a bid to write a new constitution to replace the current one that dates back in parts to Turkey's military regime of the 1980s.
Last Update: Feb 17, 2016 4:15 pm
RELATED TOPICS