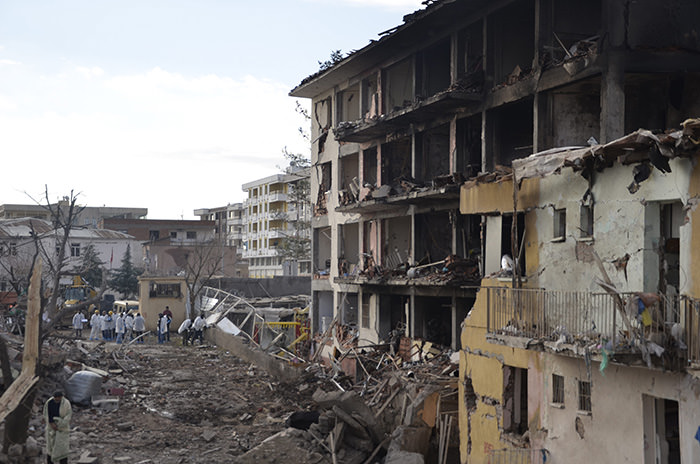 |AA Photo
by Daily Sabah Feb 18, 2016 12:00 am
The Kurdish Communities Union (KCK), an umbrella network that includes the PKK terrorist organization, announced on July 11, 2015 with a statement that the cease-fire declared in 2013 had ended. Since then, the PKK, which is linked to the YPG/PYD, has launched a series of attacks against both security forces and civilians in cities all across Turkey.

The same day, Gendarmerie Corporal Musellim Ünal was killed in clash with the PKK in Adıyaman province and two days later, terrorists killed two police officers, Feyyaz Yumuşak and Okan Acar, in their home while they were asleep.

July 23, 2015: The PKK killed two civilians, Mürsel Gül in Istanbul and Ethem Türkmen in the southern province of Adana, and one police officer Tansu Aydın in Diyarbakır province located in southeastern Turkey.

July 28, 2015: Sergeant Ziya Sarpkaya was killed while in plain clothes during his furlough in Hakkari.

July 29-31, 2015: Six soldiers, two civilians, and a police officer were killed in various cities by the PKK.

August 19, 2015: A booby trap was detonated by the PKK terrorist organization, blowing up a military armored vehicle passing by, killing eight soldiers.

September 6, 2015: A bloody attack by the PKK killed 16 soldiers and injured six others in the town of Dağlıca in southeastern Turkey, as military armored vehicles were targeted by roadside bombs planted in advance.

January 14, 2016: PKK terrorists attacked the police department in the Çınar district of southeastern Diyarbakır province late Wednesday. In the attack carried out with a bomb-laden vehicle, rocket launchers and long-barreled rifles; five civilians, three of them children, and one policeman were killed and 39 others including six policemen were injured.

February 17, 2016: A car bomb was detonated while military service vehicles were passing by killed at least 28 civilians and military personnel and injured 61 others in Turkey's capital Ankara.
Last Update: Feb 19, 2016 12:43 am
RELATED TOPICS