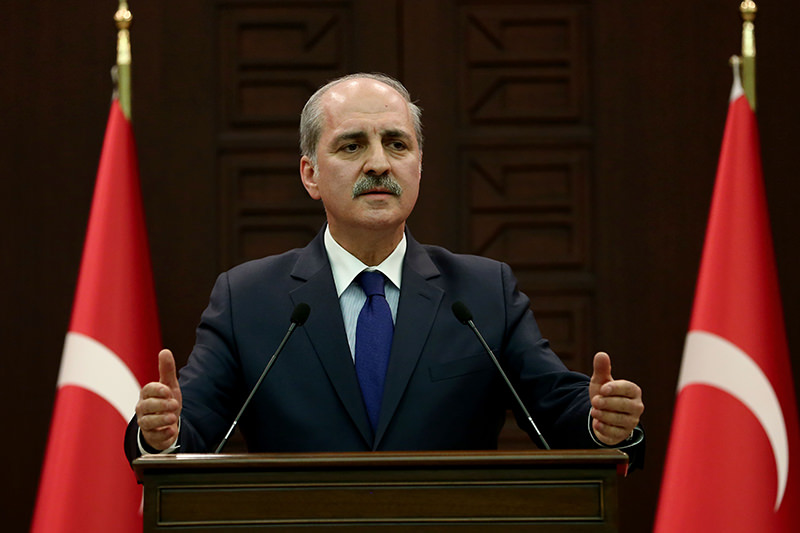 | AA Photo
by Daily Sabah with Agencies Feb 22, 2016 12:00 am
Speaking after the weekly cabinet meeting, Deputy Prime Minister Numan Kurtulmuş said on Monday that Turkey welcomed the ceasefire plan for Syria worked out by the United States and Russia and hoped that Moscow would now cease its air strikes that have killed civilians.

"We view it as possible that a ceasefire will be reached. We hope it will not be like previous ceasefires and will have the capacity to be implemented," he told reporters at a press conference after the cabinet meeting.

"We hope that Russia, in its fight against Daesh, will not fly its jets and kill innocent people," while negotiations take place over an end to the five-year conflict, Kurtulmuş said.


Once again underlining Turkey's position that Syria's Bashar Assad should step down, Kurtulmuş said: "our wish is that those who have committed crimes against their people are not given a say over Syria's future.

He also drew attention to Turkey's increased efforts to manage the ongoing refugee crisis. The number of illegal migrants intercepted by Turkish security forces have doubled in 2015, while the number captured on seas had increased by six times, he said showing the real extent of the Syrian crisis and its devastating effects.

He reiterated that the international community had not fulfilled its responsibilities in the humanitarian crisis, while Turkey was left to shoulder the whole burden of the Syrian war.

The Deputy PM said that 146,589 illegal migrants were intercepted by Turkey in 2015, 91,000 of which were captured only in the Aegean and the Mediterranean seas.

He also touched upon the investigations into the deadly Ankara bombing. He stated that the identity of the Ankara bomber was to be clear after a series of DNA tests and necessary legal proceedings, however, he said that the conduct of the bombing was clear and that there was no doubt on who the assailant groups behind the attack were.

Kurtulmuş said that a thumb belonging to the bomber was found at the blast site and compared with the fingerprint database. He said that it matched with Saleh Nejjar, which was acknowledged by government officials as the terrorist who carried out the bombing. Kurtulmuş said that this person arrived from PYD-held areas in Syria to Turkey, and his records were taken as Saleh Nejjar.