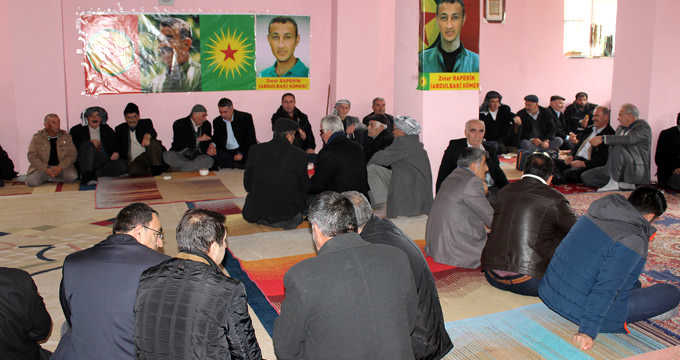 by Daily Sabah with AFP Feb 23, 2016 12:00 am
Turkish security forces on Tuesday detained 10 people in a raid on a condolence gathering for the suicide bomber who killed 29 people in last week's terrorist attack on a military bus convoy in Ankara.

Those detained were attending a traditional condolence gathering for the dead PYD terrorist in a mosque in the İpekyolu district of the eastern -mainly-Kurdish- city of Van, Anadolu Agency reported.

Three days after Turkish officials stated that the bomber was a YPG [the armed wing of the PYD] terrorist, a hardliner Kurdish racist group named Kurdish Freedom Falcons (TAK) claimed the attack and identified the bomber as Abdulbaki Sömer with the nom-de-guerre Zinar Raperin. Turkish officials later confirmed Abdülbaki Sömer - who entered Turkey under the guise of being a refugee by the name of Salih Nejar - as the bomber who detonated an explosives-laden hire car that had been stolen in İzmir, western Turkey.

They identified Sömer, a construction worker, as someone with links to the PYD terrorist organization, which is the Syrian wing of the PKK.

Among those arrested were the bomber's brother, his father and the imam of the mosque, the report said. All were detained on charges of making propaganda for a terror organization.

The mosque was adorned with pictures of Sömer whose terrorist attack claimed the lives of 29 and left 61 wounded.

A deputy for the PKK-affiliated Peoples' Democratic Party (HDP), Tuğba Hezer, was also at the gathering. Prosecutors have launched a criminal investigation and will seek to have her parliamentary immunity removed, several reports said.

Prime Minister Ahmet Davutoğlu denounced her presence at the gathering as "treachery" and called on the HDP to take a tough stance against her.

"Taking part in a condolence ceremony for a suicide bomber, who spilt blood, commemorating him with respect, is the greatest treachery," he said in parliament.

His criticism was echoed by the leader of the main opposition Republican People's Party (CHP), Kemal Kılıçdaroğlu, who accused Hezer of "encouraging acts of terror."

The ruling Justice and Development Party (AK Party) criticizes the HDP for its close links to the PKK terrorist organization while the party claims it is an "independent entity."

Turkey recognizes PYD/YPG as a terrorist organization, and the group is largely accepted as the Syrian wing of the PKK, which is recognized as a terror organization by the U.S., the EU and NATO.
Last Update: Feb 23, 2016 8:55 pm
RELATED TOPICS