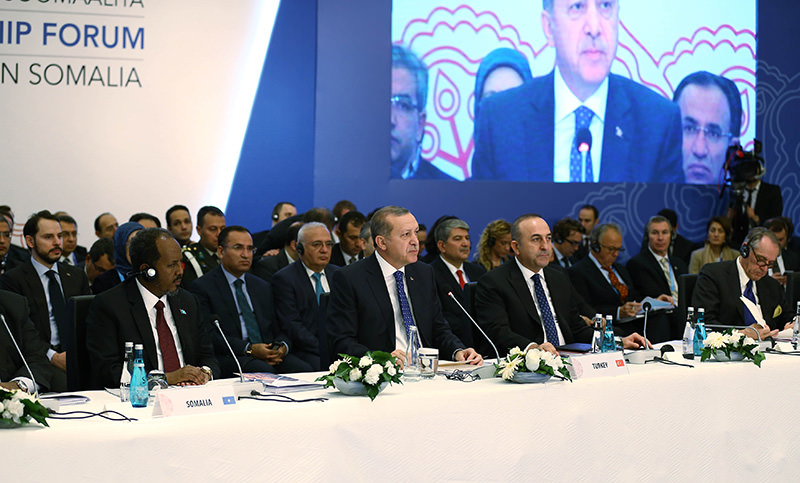 | AA photo
by Daily Sabah Feb 23, 2016 12:00 am
President Recep Tayyip Erdoğan said on Tuesday that Turkey does not make a differentiation between terror organizations and urged all countries in the world to embrace such a point of view.

"We do not differentiate between Al-Shabaab and Daesh or Al-Nusra, or between PKK, PYD, and YPG. No matter who does it, terror is terror, and a determined struggle against this threat should be undertaken," he said.

The president made the comments on Tuesday in Istanbul during an opening speech at the sixth Somali Compact High-Level Partnership Forum (HLPF), which he is co-chairing along with Somali President Hassan Sheikh Mahmoud and Deputy U.N. Secretary-General Mr. Jan Eliassoin. Somali and foreign delegates from 51 countries have converged in Istanbul for a two-day forum to discuss Somalia's reconstruction process.

One of the topics that will be handled throughout the forum will be Somalia's security needs as the country must address tangible solutions to fight Al-Shabab terrorists' activities in the country, an Al-Qaeda-linked militant group.

"As you all know, Somalia is going through a critical period…During this rocky road, we need to support Somalia and never leave them in the lurch," Erdoğan said during his speech, referring to the country's political, security and development agenda, consisting of focus on terrorism.

Indicating that Turkey has been also fighting terror for over 30 years, Erdoğan emphasized that a successful struggle against terror can be only sustained when one does not discriminate between "good" and "bad" terrorists.

"All countries should adopt a common stance against terrorism and countries that support terrorism. Using the phrase 'but' in this matter, making a differentiation between 'good terrorist' and 'bad terrorist', and overlooking the link [between terror organizations] it had seen before, is supporting terrorism," the president said.

"Everyone needs to understand that with such a stance, there can be no struggle against terrorism," Erdoğan further added.

Even though the U.S. insists on not calling the PYD and its armed wing YPG, terrorist organizations despite Ankara's warnings, the NCTC, a body of the U.S. government, described the PYD as the PKK's Syrian offshoot.

The president was referring to the U.S.'s latest stance defining the PKK and PYD as two separate, unlinked organizations, whereas a prior 2014-dated document of the government's national counter-terrorism center (NCTC), describes PYD as the Syrian affiliate of the KONGRA-GEL, under which the PKK is also listed.

The PKK and its Syrian, Iraqi and Iranian wings are all united under KONGRA-GEL, which the U.S., EU and Turkey recognize as a terrorist group.
Last Update: Feb 23, 2016 11:59 am
RELATED TOPICS