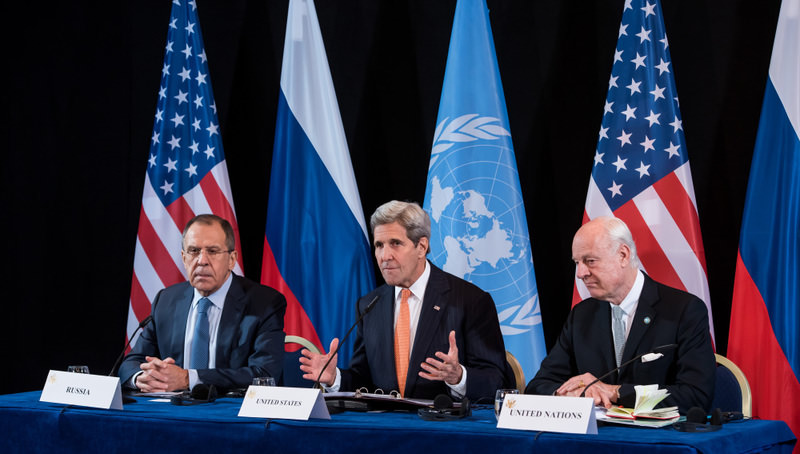 Russian FM Lavrov (L) and U.S. Secretary of State Kerry hold a press conference after the International Syria Support Group (ISSG) meeting in Munich on Feb. 11.
by Feb 25, 2016 12:00 am

Syria's warring parties agreed to a cease-fire deal on Tuesday, but the U.S. warned it would not wait long to see if the truce sticks. Also, for the first time Washington voiced the possibility of a partition of the war-torn country

Syria's warring parties agreed to a cease-fire deal on Tuesday, but the U.S. warned it would not wait long to see if the truce sticks while some rebels on the ground rejected it as a "waste of time." The U.S. and Russia-brokered deal calls for a "cessation of hostilities" between forces loyal to Syrian leader Bashar Assad and opposition groups, and is due to take effect at midnight on Friday Damascus time. But the truce agreement, clinched Monday, does not apply to extremists such as the DAESH group and al-Nusra Front, which analysts said could be a major hurdle to enforcing it on Syria's complex battlefield.

U.S. Secretary of State John Kerry, a key figure in brokering the agreement, said Washington was considering an unspecified "Plan B" if the regime and Moscow prove not serious about negotiating a political transition in Syria.

"The test is not going to be proven in six months or a year and a half, when the election is supposedly scheduled," Kerry told the Senate Foreign Relations Committee.

"We're going to know in a month or two whether or not this transition process is really serious."

Analysts say the splintered state of play of the conflict - in particular the complicated make-up of Syria's opposition forces and frequently shifting frontlines - means the ceasefire may be doomed to fail.

Abu Ibrahim, a commander in the 10th Brigade opposition force in northwestern Latakia province, predicted "numerous rebel groups" would reject the agreement, which was formed "without consulting any factions on the ground."

"It's a waste of time and it's difficult to implement on the ground," he said.

More than 270,000 people have been killed in Syria's five-year civil war, Britain-based monitor the Syrian Observatory for Human Rights said Tuesday, more than 10,000 higher than its previous toll in December.

Residents in Damascus, tired after years of war, were skeptical the new deal would take hold.

"It's a fragile deal," said Rana, a 54-year old pharmacist. "Cease-fires have been announced repeatedly in the past and we didn't see any results on the ground because they were violated," she said.

Turkey, a key backer of the rebel groups fighting in its war-ravaged neighbor, also expressed skepticism and said it would keep shelling Kurdish groups in northern Syria "if necessary."

Deputy Prime Minister Numan Kurtulmuş told reporters in Ankara that he was "not very optimistic (the truce) will be respected by all the parties."

Extremists carried out their deadliest attack in the war on Sunday, when 134 people - mostly civilians - were killed in a series of blasts near Damascus claimed by DAESH.

DAESH and allied extremists wrested control of the key town of Khanasser from regime forces in the northern province of Aleppo, the Observatory said Tuesday.

Noah Bonsey, a senior analyst at the International Crisis Group, said on Twitter the fact al-Qaida-affiliated al-Nusra was except from the deal "likely dooms it, since Russia tends to hit others and call al-Nusra (or DAESH)."

The cease-fire plan was announced by top diplomats in Munich earlier this month, but failed to take hold last week as initially planned.

As well as reducing violence and expanding humanitarian access, it aims to pave the way for a resumption of peace talks that collapsed earlier this month in Geneva.

U.N. convoys with food and medicine for 30,000 people set out for two more besieged towns on Tuesday, part of a major push to help civilians facing starvation that began last week.

"These are the first of what we hope to be a series of deliveries to meet the needs of people that humanitarian workers have not been able to reach for a long time," said U.N. spokesman Stephane Dujarric.

French President Francois Hollande called on all sides to respect the truce, "the sooner, the better."

"Pressure must be exerted on the Syrian regime and its supporters, in this case Russia, so that the bombings cease."

Despite being on opposing sides of the conflict, Moscow and Washington have been leading the latest diplomatic push to try to resolve the brutal conflict.

Both powers are pursuing separate air wars in Syria, with a U.S.-led coalition targeting DAESH and occasionally other extremist groups.

Russia says it is targeting "terrorists" in its strikes but has been accused of hitting non-extremist groups in support of Assad, a longtime ally.
RELATED TOPICS