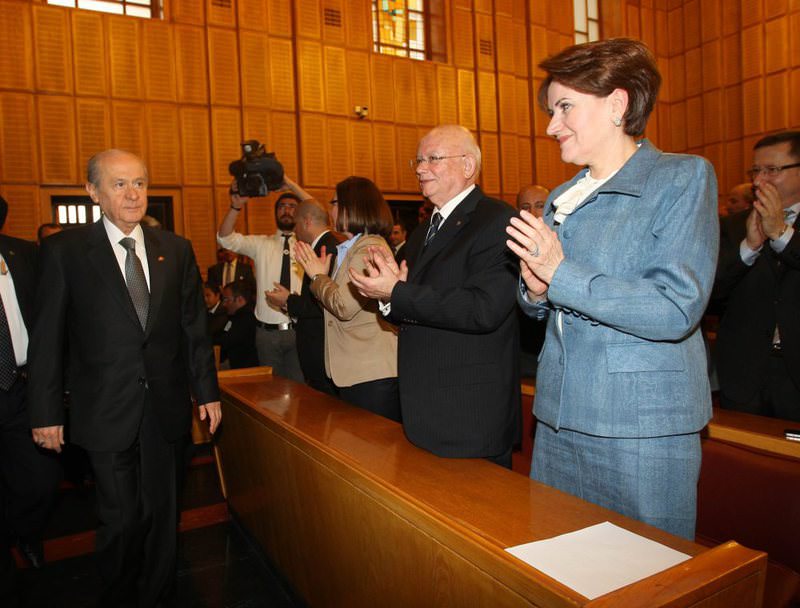 In this file photo from 2012, MHP Chairman Bahu00e7eli (L) and then MHP Deputy Aku015fener (R) are seen in a parliamentary group meeting. Aku015fener is accused of being affiliated with the Gu00fclen Movement.
by Yunus Paksoy Mar 02, 2016 12:00 am

While dissidents express their frustration with the MHP administration on a daily basis, MHP Chairman Bahçeli on Monday made a statement and blamed the Gülen Movement for the intra-party uprising. Bahçeli claims the movement plans to seize the MHP and drag the party's youth into the streets

Nationalist Movement Party (MHP) Chairman Devlet Bahçeli claimed in a written statement on a news website that the Gülen Movement, led by fugitive cleric Fethullah Gülen, plans to seize the MHP chairmanship and turn it into an operational party by dragging the youth into the streets. With dissidents in the MHP become more vocal and Deputy Chairman Ümit Özdağ submitting his resignation last week, Bahçeli prepared a written statement on Monday accusing the Gülen Movement of attempting to stir the party and seize full control of it. "[The goal] … is to turn it into an 'operational party' by using our movement in accordance with their political interests and dragging it into the streets," Bahçeli said.

It was speculated that the Gülen Movement is targeting the MHP chairmanship through Meral Akşener's candidacy. Akşener, a former MHP deputy, kicked-off an election campaign-like tour last week in the western province of Denizli where she addressed dissidents and sought backing.

Even though Bahçeli did not name the "political tool," Akşener quickly dismissed the claims about her being the "tool." "I have no connection to the Gülen Movement. I would have proudly said if I had," she contended.

Dissidents have been seeking an extraordinary congress from the party administration after they collected over 500 signatures and submitted them in the presence of a notary public. Bahçeli, however, refuses to gather the congress and vows to fight in court. The case is now before the court and dissidents are awaiting a decision.

Meanwhile, dissidents are in a tough position as the MHP bylaws do not allow elections at extraordinary congresses. The bylaws must be changed if the dissidents are to have any chance of ousting Bahçeli. If dissidents manage to take the MHP to an extraordinary congress, the aim will reportedly be to allow elections at extraordinary congresses. Even then, dissident may not have enough signatures, inside sources argue.Speaking to Daily Sabah, Ersoy Dede, a news show presenter for the 24 TV channel and a columnist, asserted that the Gülen Movement aims to put obstacles in the way of the Justice and Development Party (AK Party) by weakening the MHP and dividing it. "The Gülen Movement supported the CHP [Republican People's Party] and HDP [Peoples' Democratic Party], trying to gain political power. The 'parallel structure' [Gülen Movement] cannot do everything it wants with judicial and police power. Now they are exerting efforts to block the AK Party," he said.

Claiming that the Gülen Movement plans to divide the MHP and realize its agenda, Dede said: "Seizing the chairmanship of the MHP has never fallen off the movement's agenda. Emre Uslu [a journalist affiliated with the movement] sends a tweet in favor of Akşener. She also appears on Gülen Movement-affiliated media outlets. Bahçeli resists this uprising led from the U.S. [where Gülen lives]."

When asked about Akşener's role, Dede said he does not want to dwell on names. "The significant thing is the movement's mentality. 'It is sufficient when the MHP is divided,' they say. The goal is to put hurdles in the way of a presidential system. The AK Party and MHP will apparently work together for a new constitution. The movement wants to prevent that," Dede contended.

"Bahçeli has never surrendered to the movement, and does not look like he will lose his seat in the near future. He will not let his party be shattered," he added.

Cem Küçük, a columnist for the Star daily, suggested that Akşener's "odd" relations with Gülen Movement-affiliated people "should be scrutinized." Küçük also drew attention to who Akşener welcomes in her office.

"Akşener still appears on the movement's TV shows. She is one kind of Trojan [horse]," Küçük said. He questioned why Bahçeli approved her candidacy in the June 7 elections.

Underscoring that Bahçeli will not just leave his post and will stay and fight, Küçük said: "We'll see where it takes us. Akşener receives strong backing from the 'parallel structure.' If this war continues between Bahçeli and the movement, Bahçeli will prevail. However, if it carries on as a Bahçeli-dissidents war, it is open to all kind of results." Küçük also pointed to the closure of 12 provincial headquarters across Turkey. "Bahçeli must be in distress when it happens," he added.
RELATED TOPICS