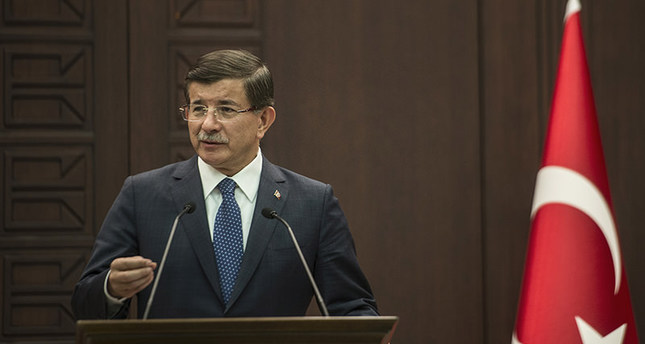 The Constitutional Court's decision regarding Cumhuriyet daily's Can Dündar and Erdem Gül is interference to an ongoing trial, Prime Minister Ahmet Davutoğlu said on Wednesday during a press conference.

"Without the legal process being completed, there could be no application the Constitutional Court. No one has the right to influence an ongoing trial," the premier said. "All the institutions can be criticized due to decisions they make. President Erdoğan's statement is in line with this."

Davutoğlu said the case against Dündar, the editor-in-chief of the newspaper, and his colleague Erdem Gül, should not be viewed as a free-speech issue. He said, Dündar and Gül published confidential documents and therefore "there is espionage in this case."

PM Davutoğlu further added that the ruling Justice and Development (AK) Party was the one that initiated individual appeals to the Constitutional Court.

He said, "I had already expressed my view regarding Dündar and Gül that they should be on trial without arrest."

The Constitutional Court gathered last week and decided by a majority of votes (12 against three) that there was an infringement of rights concerning the arrests of Can Dündar and Erdem Gül.

After the top court's decision, Dündar and Gül were freed in the early hours of Friday. The decision for their release from jail however was criticized by President Recep Tayyip Erdoğan, just before leaving for west Africa on Sunday in a press conference held at Atatürk International Airport.

Erdoğan said that he did not "respect" the top court's decision and the case involved espionage and had nothing to do with freedom of speech.

Dündar, Cumhuriyet daily's editor-in-chief, and Gül, its Ankara bureau chief, were arrested in November over allegations including espionage, attempting to overthrow the government and supporting terrorism.

An investigation was launched into Dündar and Gül after the newspaper published images in May purportedly showing shells and ammunition loaded on Syria-bound trucks belonging to Turkey's National Intelligence Organization (MIT).

"Deputies do not have the right to commit crimes while hiding behind parliamentary immunity," the premier said, emphasizing the "provocative" nature of Demirtaş's call.

Davutoğlu said that the HDP deputies were collaborating with PKK terrorists, trying to drag Turkey into chaos.