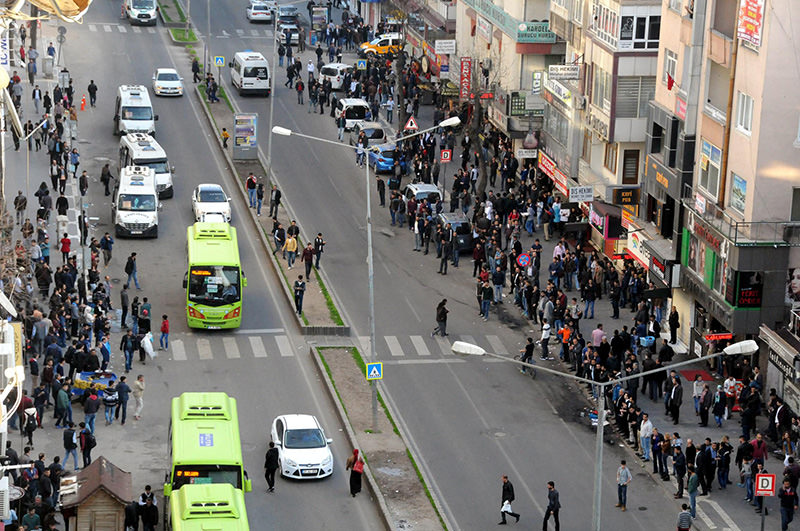 | DHA photo
by Daily Sabah Mar 03, 2016 12:00 am
Kurds in the southeastern Sur district of Diyarbakır province did not join calls made by the Peoples' Democratic Party (HDP) and its co-chair, Selahattin Demirtaş, to disobey the imposed curfew.

Demirtaş on Monday urged Kurds in the region to march toward the Sur district, in which an extensive counter terror operation is ongoing under curfew. "Everyone should march toward Sur on Wednesday at 4 p.m.," Demirtaş had said.

Demirtaş's call, however, found a small response. Only a couple hundred people were on the streets on Wednesday. It was yet another failed call by the HDP and Demirtaş.

Even though the call resulted in failure, President Recep Tayyip Erdoğan and Interior Minister Efkan Ala on the same day slammed it and pointed fingers at Demirtaş. "I don't believe that the locals and my Kurdish brothers and sisters will say yes to a call that smells like an invitation to terror. The duty of a deputy cannot be calling for crime. I think prosecutors should do their part," Erdoğan said.

Ala also strongly criticized Demirtaş's calls to break the curfew in Sur, and said "it was provocation."

The Diyarbakır governorate on Wednesday praised the people of Diyarbakır for showing common sense and rejecting to take part in an illegal demonstration, which was organized "on the pretext of operations against the terrorist organization."

Three soldiers were killed in a clash with PKK terrorists in the Dargeçit district of the southeastern province of Mardin early on Thursday, the military announced.

The General Staff said in a written statement that three soldiers were killed. Eight PKK terrorists were also killed in the operation.

The General Staff also conveyed its condolences to the families and relatives of the slain soldiers. The operation is still underway. Turkey's southeast has been the scene of intense military operations since December against the PKK, which renewed its armed campaign against the Turkish state in July 2015.  Since then, more than 3,000 terrorists have been killed in operations across Turkey and Northern Iraq, according to the military. The renewed conflict has also claimed the lives of more than 280 security officers.

People of Cizre back in district after operations

With the curfew partially lifted in Cizre, people who fled the region due to heavy clashes between security forces and the PKK are now returning and waiting in long lines at checkpoints.

The 79-day curfew was partially lifted on Wednesday. The governorate said the curfew will still be in effect from 7:30 p.m. to 5 a.m. every day.

Following the end of the operations and loosening of the curfew, locals are now faced with a destroyed district. Operations that were carried out to sweep out the PKK damaged most of the district's buildings and shops. Rebuilding infrastructure is ongoing, according to reports.
Last Update: Mar 03, 2016 6:28 pm
RELATED TOPICS