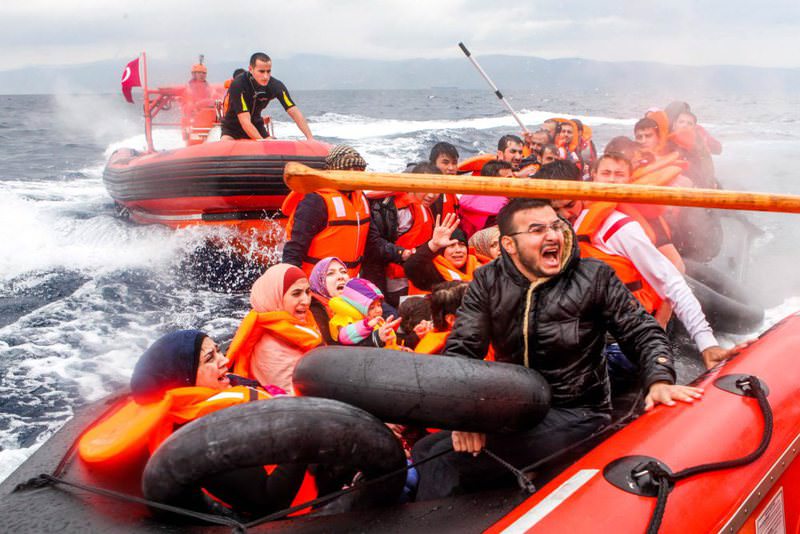 Amid the ongoing refugee crisis affecting both Turkey and Europe heavily, sources from the Interior Ministry said a special division of 3000 police officers will be established to solely focus on illegal migration and tackle human trafficking

As Turkey intensifies its efforts to prevent illegal migration to Europe, sources from the Interior Ministry told Daily Sabah that a special division within the National Police Department will be established. Interior Minister Efkan Ala recently granted approval for the establishment of the new directorate, which is expected to be fully operational within a month. Sources also indicated that the new directorate will only focus on stopping human trafficking. Apart from its headquarters in Ankara, the new directorate is expected to have provincial organizations in border towns in the southeast as well as in western coastal towns. A combined task force from the new directorate will include around 3,000 police officers and the directorate is expected to work closely with the Migration Management Directorate and the Coast Guard, sources said. In 2015, Turkey intercepted 146,485 illegal migrants and arrested 3,694 human smugglers. Figures for the previous year were 58,647 and 1,460, respectively.

"Human trafficking cannot be prevented by governments acting individually. The battle against human trafficking requires well-designed, coordinated and comprehensive responses. Therefore we work with our international counterparts closely," a high level source from the Interior Ministry said, adding that in 2016 they started to conduct international operations with foreign police forces to prevent human trafficking operations. As an example, within the framework of an agreement between the Turkish and German governments regarding migrant smuggling, on Jan. 20 the two countries' police forces carried out a joint operation called "Wave." German Chancellor Angela Merkel was informed about the "Wave" operation prior to German Federal Police officers' last visit to Ankara. She was briefed on the details of the two countries' police work.

The joint operation found that the leadership of a criminal organization in Turkey is a Syrian, Ahmet S., code-named "Doctor." The criminal organization gained 9.5 million euros thanks to an airline courier from Germany to Turkey. The migrant smuggling was organized with a "ghost ship." After the human smuggling under Ahmet S.'s control was brought to light, operations in Germany and Turkey, including in Istanbul, İzmir and Mersin, netted nine Syrians and one Turk.

Due to its geographical position Turkey is a significant destination and transit country for migrants and human traffickers. Turkey has actively participated in several global and regional international instruments and efforts concerning human trafficking. Turkey was among the first signatories of the Palermo Protocol in 2000 and also signed the Council of Europe Convention on Action against Trafficking in Human Beings in March 2009.

Turkey adopted these international instruments to show its political will and determination to fight human trafficking in cooperation with the international community.