US warns PYD not to support PKK terrorists in Turkey 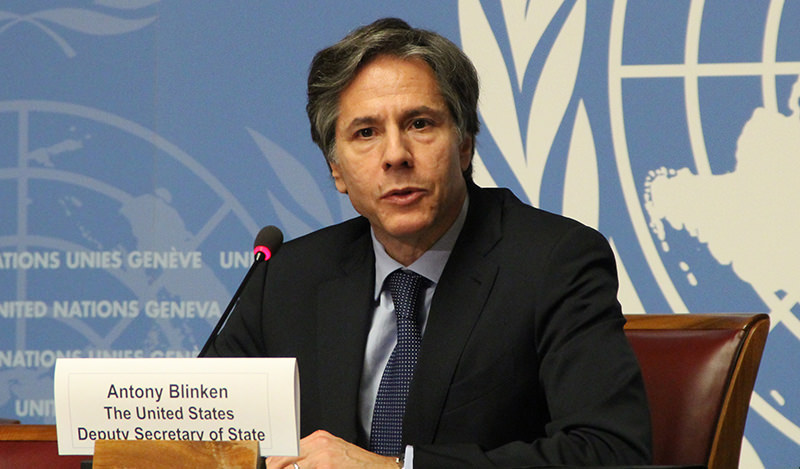 | AA Photo
by Daily Sabah with AA Mar 03, 2016 12:00 am
U.S. called on the Syrian PKK affiliate Democratic Union Party (PYD) not to support the PKK in Turkey and to focus on the anti-DAESH fight in Syria.

Speaking at a news conference at the U.N. in Geneva, Deputy Secretary of State Anthony Blinken said on Wednesday that Turkey's cooperation in dealing with the Syrian crisis is significant and its concerns about PYD are "not a secret."

He said: "We also made it very clear to the PYD that any actions it takes to either support the PKK or to engage the other opposition groups are profoundly problematic and we look to the PYD to act responsibly and to focus its efforts on the fight against DAESH."

Ties between Washington and Ankara have been strained over the PYD and its People's Protection Units (YPG) militia, with the U.S. insisting that it is an effective partner in the fight against DAESH.

Ankara, however, says that it is the Syrian affiliate of the PKK, which is listed as a terrorist organization by Turkey, the U.S. and EU.

Washington's former Ambassador to Ankara Francis Ricciardone said on Friday that the U.S. should acknowledge the PYD as part of the PKK.

"The PYD has at least expressed its difference with the PKK – we cannot be deluded by that," he said in remarks at the Association of Turkish American Associations' annual Washington gathering.

"Americans have to understand the PYD is part of the PKK. There's no sense in pretending otherwise," he added.

Despite making remarks about how it understands Ankara's concerns, actions in the field and several other statements show that Washington and Ankara are still on different pages.

U.S. Secretary of State John Kerry said on Thursday last week that the U.S. is "very sensitive" to Ankara's concerns, saying: "We need to respect Turkey's concerns, and we will, we have, we believe," in a U.S. House Foreign Affairs Committee meeting.

The U.S. provided arms to the PYD in October, which drew heavy criticism from Ankara. The U.S. air force dropped 50 tons of arms and ammunition to the PYD in the northern Syrian province of Hasakah. The 112 pallets reportedly contained ammunition for M-16s and AK-47s.

Elsewhere, the profile page for the PYD on the United States National Counterterrorism Center (NCTC) website that described the group as the Syrian affiliate of Kongra-Gel (KGK), has been removed.

The archived page from Feb. 21 has the NCTC document from 2014 that says: "The PYD's presence in Syria along Turkey's border might pose a heightened threat to Turkey and increase tensions along the border."