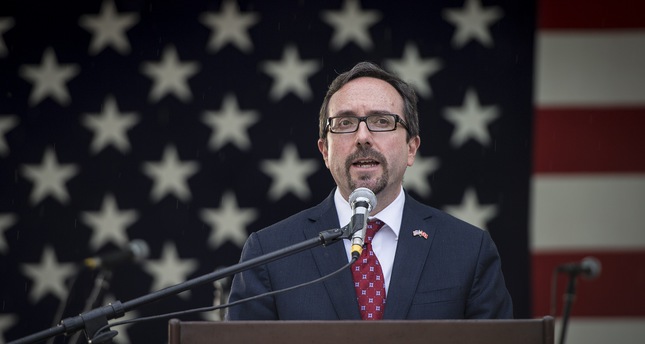 Bass, in a series of tweets, criticized the trustee panel's "interference with Zaman's editorial process" and said he was watching with concern reports of police intervention against those protesting the court decision.

The Turkish twitter users, including a number of prominent journalists and diplomats, on the other hand, described the Bass's messages as foreign interference with Turkish domestic politics.

Turkish Ambassador to Washington, Serdar Kılıç said on Twitter that ambassadors should leave the criticism of local and politically sensitive matters to their offices or raise them in the private meetings.

Police dispersed a group of protesters late on Friday who had gathered outside the building of the Feza Gazetecilik media group in Istanbul's Yenibosna area after it was placed under the control of a trustee panel.

Earlier on Friday, an Istanbul court had decided to appoint trustees for Zaman newspaper, which is being accused of supporting a criminal organization led by U.S.-based cleric Fetullah Gülen.

"When will American ambassadors stop releasing statements as if they are colonial governors in this country? Isn't now the time?" Kutluğ Ataman, an internationally well-known filmmaker and artist tweeted.

Others questioned previous U.S. Ambassadors' postures on the Gulen-led mass trials which imprisoned hundreds of top generals, journalists, businessmen and politicians on bogus charges. High courts later released almost all of them.

Güler Kömürcü, a veteran journalist who was accused of being a member of a deep state organization called Ergenekon, said that when she faced the charges, she e-mailed then-U.S. Ambassador Francis Ricciardone to ask for his help.

"The Ergenekon indictment included the phone record of my interview request with U.S. Ambassador Ricciardone. I asked him, 'You were wiretapped illegally. Why don't you file a complaint about these people?' but he did not respond to my email," she said.

The company is accused of supporting the Gülenist Terror Organization (FETÖ), headed by U.S.-based preacher Fetullah Gülen, who is said to have infiltrated Turkey's state apparatus with thousands of followers in an effort to overthrow the government.