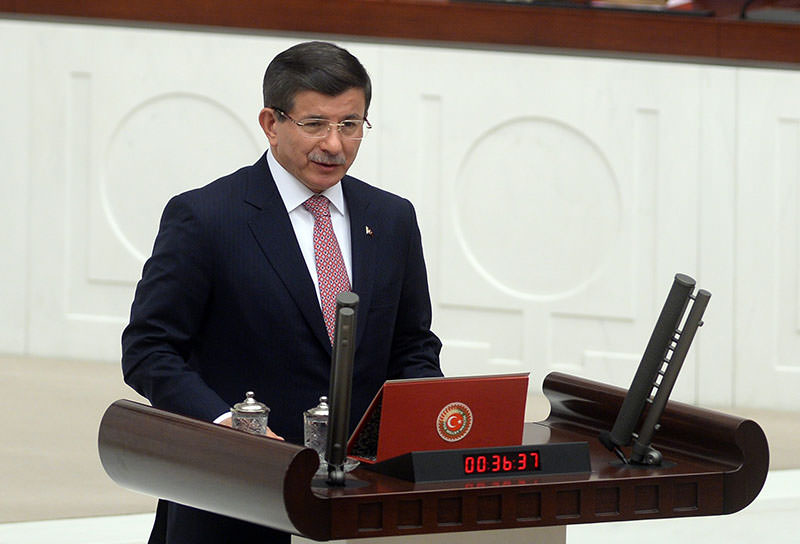 | AA photo
by Daily Sabah Mar 06, 2016 12:00 am
The summary of proceedings to lift the parliamentary immunity of some Peoples' Democratic Party (HDP) deputies has been transferred to the Parliament, Prime Minister Ahmet Davutoğlu said on Sunday to Turkey's private-run TV channel A Haber in a live interview.

The premier said that the summary of proceedings related to accusations of terrorist offenses allegedly undertaken by the HPD deputies will be on the parliamentary agenda in the coming weeks, after the current budget debates end.

"I believe that we should defend every deputy's chair immunity even if they have the most dissident idea against me. Whatever they say or whichever idea they declare, no one can touch a person talking at the chair of the people on behalf of them," Davutoğlu said during the interview.

But at the same time, the prime minister stated that an incident which involves a deputy's visit to the house of the "monster" who detonated a bomb in the center of Ankara on Feb. 17 leading to 29 people's death, cannot be evaluated in the context of "immunity."

Removing some of the HDP deputies' parliamentary immunity has become a hot topic in Ankara since HDP deputy Tuba Hezer's visit to the house of the suicide bomber who perpetrated the Ankara car bombing.

In the history of the Republic of Turkey, there have been 40 deputies whose legislative immunity was suspended and prosecuted. In 1994, the parliamentary immunity of seven pro-Kurdish Democracy Party (DEP) deputies was removed, due to their direct links with the PKK terror organization and "betrayal of the integrity of the state."

In 1998, the parliamentary immunity of deputies from the center-right True Path Party (DYP) Sedat Bucak and Mehmet Ağar was removed, due to their involvement in corruption and criminal activities following the Susurluk scandal.