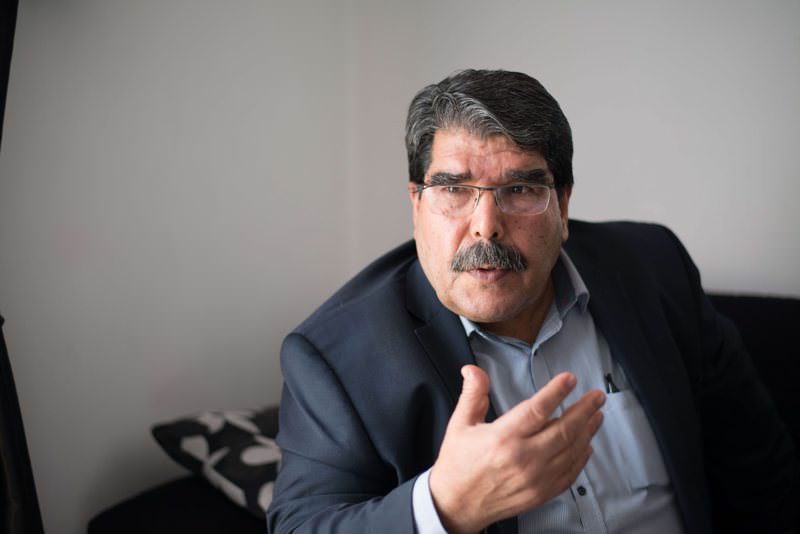 by Daily Sabah Mar 06, 2016 12:00 am
The recent statements of PYD leader Salih Muslim regarding relations with Turkey and his role during the operation when Turkish troops evacuated a tomb and guarding soldiers inside Syria sparked a debate in Turkey's parliament on Sunday.

In an interview published in Turkish daily Hürriyet early Sunday, Muslim claimed that he was in Istanbul during the evacuation operation of the Tomb of Süleyman Shah and some 40 soldiers stationed in the outpost in February 2015. He said that he was in touch with the crisis desk formed in Ankara, and he was informed after the operation was concluded.

Deputy group chairmen of the main opposition Republican People's Party (CHP) Özgür Özel and Nationalist Movement Party (MHP) Oktay Vural also criticized the government for acting along with the PYD, which is considered a terrorist group by Turkey for acting as the Syrian offshoot of the PKK terror organization, which has resumed its armed insurgency against the Turkish state since July 2015. However, the HDP - and the CHP up to a point - state that Turkey should revise its policy against the PYD, while the MHP strongly objects any communication with the group.

Elitaş responded to the opposition that they act on the grounds that Muslim's comments were true.

Being Turkey's only exclave with a symbolic garrison, the tomb believed to contain the remains of the grandfather of Osman I, the founder of the Ottoman Empire, was originally located in the Jabar Fortress near Tabqah before being relocated to avoid flooding by the Tabqah Dam in 1973. It was relocated to some 30 kilometers south of the Turkish border on the banks of the Euphrates River, however, when the Tishrin Dam was built, it was moved to a higher location, while the only bridge crossing the dam passed right next to the tomb, increasing its strategic importance.

As the surrounding areas of the tomb had fallen to Daesh in 2014 along with rising threats from the terrorist group to attack the garrison, Turkish authorities decided to relocate the tomb and garrison to avoid a possible confrontation that would resolve in greater involvement in the civil war in Syria. Turkish troops passed through PYD-held territory and evacuated the remains in the tomb along with the garrison to the Syrian village of Ashmeh in less than one kilometer south of the border, with the right to restore the garrison in its former location being reserved.

The relations between Turkey and PYD started to deteriorate following PKK's attacks in the country. Pointing out to the organic links between the two organizations, Turkey accuses the PYD of acting in coordination with the PKK and says that international aid given to the PYD on the grounds of combatting Daesh are being funneled into the PKK to be used in its attacks inside Turkish territory.

In the interview, Muslim said that the PKK is a domestic issue for Turkey, and claimed that they only have ideological links with the PKK, however admitting that the PYD is being represented in umbrella organizations founded by the PKK, and he was a sympathizer. He also claimed that PKK members located in northern Iraq did not take part in clashes inside Syria. Muslim also claimed that the bomb attack on February 17 in Ankara that killed 29 people and targeted Turkey's top military institutions did not have any connections with the PYD and its armed wing the YPG. Although a hardline PKK offshoot group had claimed the attack, Turkish authorities stated that the bomber, initially acknowledged a Syrian Kurd from PYD-controlled territory based on border security records, was trained in Syrian territory and entered into Turkey from Syria before the attack, while the preparation and the conduct of the attack was carried out by PYD / YPG related elements.

Muslim said that they can play an intermediary role between Ankara and the PKK terror organization.

Human rights violations by the PYD's armed wing YPG who targeted Arabs and Turkmens in northern Syria following the Daesh retreat in Kobani and the intensified U.S. led coalition airstrikes also contributed to ailing relations between the PYD and Turkey. Muslim admitted that they have made mistakes in forcing the local population to flee and other political groups pressured by the PYD; however, he claimed that the accusations directed at them were exaggerated, despite such violations being documented and reported by international NGO's like Amnesty International and Syrian Network of Human Rights. He also said that they have criticized the YPG over conscripting minors or arbitrary withholding.

As PYD-linked forces moved to capture the towns of Azaz, Marea and Tall Rifaat which stand between Turkey and opposition held areas in Aleppo, Turkish artillery started pounding PYD targets in the area along with the adjacent Afrin district held by the PYD on Feb. 13 and 14, targeting the group for the first time since the civil war began in Syria. PYD's move into the area coincided with the Assad regime's attack to cut the supply route of the opposition between Turkey and Aleppo, leading Turkey to accuse the PYD of actively cooperating with the regime.

Muslim said in the interview that the Syrian Democratic Forces (SDF), a militia group dominated by the YPG with several minor Arab, Assyrian and Turkmen groups included, moved to capture the Mannagh Airbase located in the region before regime forces. Answering whether thePYD will move to capture the area between Azaz and Jarablous currently held by Daesh, Muslim said that the area "will certainly be rescued." Turkey strongly objects the PYD controlling its entire southern border with Syria, stating that such a move aims to encircle the country by a hostile group backed by Russia and the regime, and considers it as a national threat.

While explaining the formation of the SDF, Muslim claimed, without specifying, that secular forces in Syria are now joining their forces against extremist groups.
Last Update: Mar 06, 2016 10:41 pm
RELATED TOPICS