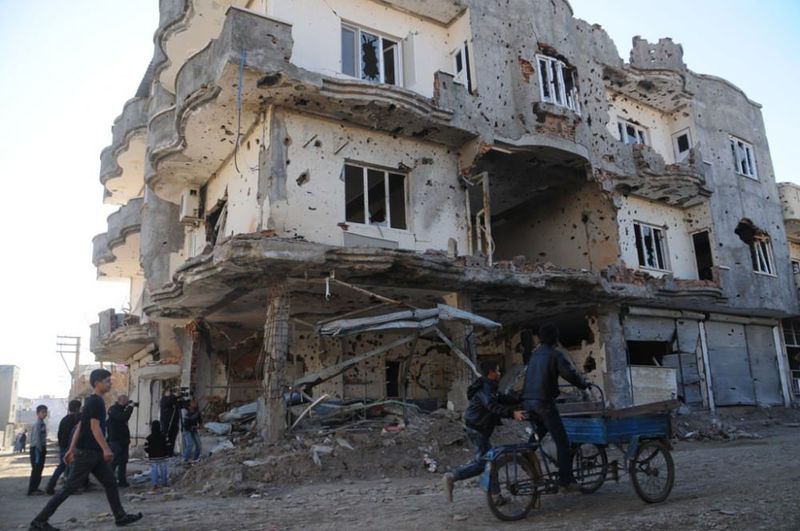 by Daily Sabah Mar 08, 2016 12:00 am
Development Minister Cevdet Yılmaz addressed the details of reconstruction in the southeastern provinces of Cizre, İdil, Silopi and Şırnak on Monday in Şırnak. Explaining that the government would eliminate the damage of terrorism, Yılmaz said: "The government will heal the wounds of its citizens immediately. We will address the necessary needs in Cizre, İdil, Silopi and Şırnak." He added that security policies alone are not enough, saying that the Justice and Development Party (AK Party) government's efforts in the democratization process will continue.

"We take all necessary steps and will continue to do so in regard to the fundamental rights and freedoms of our people. As well as democracy, we also give great importance to the issues of social, economic, educational and health services in the southeastern region. We are ready to take all possible steps toward the development of this area. In the long term, we will make all efforts for the development of the region through consultations," he said.

"We are ready to take all means of steps towards development of this area. We will eliminate the damage of terrorism; on the other hand, we will heal the wounds of the citizens immediately. In the long term, we will make all efforts to be done for the development of the region through consultations," he said.

Following the completion of assessment of determining the damage caused by terrorism, Yılmaz said that "the ministry is carrying out work with the Housing Development Administration of Turkey (TOKİ) and is to build more permanent, new houses for citizens." Also stating that the government will provide the necessary support to repair houses that were less damaged, Yılmaz said "as there are some demands by local small business owners, we will also address the needs on enhancing social life while improving the infrastructure of the cities."

Moreover, he also commented about the affects of terrorism and said "violence, in any democracy and the rule of law, has no place. We took all necessary measures against those who promote terror." Minister Yılmaz continued on by stating that with respect to fundamentals rights and freedoms, he said that government will continue its developments in democratic environment and in a democratic state of law.

About security measures, Yılmaz added that, "our understanding of security is people-oriented. Therefore, security forces are here to protect citizens' life." Reminding that many countries are experiencing problems all around the world, he said Turkey has a stable management and strong government despite the issues it faces. Also he stated that "As the Prime Minister [Ahmet Davutoğlu] allowed us to have authority to make all the necessary measurement about reconstructing and addressing the issue institutions, we hope to see a different environment soon."
RELATED TOPICS