We are ready to rebuild Turkey’s southeast, President Erdoğan says 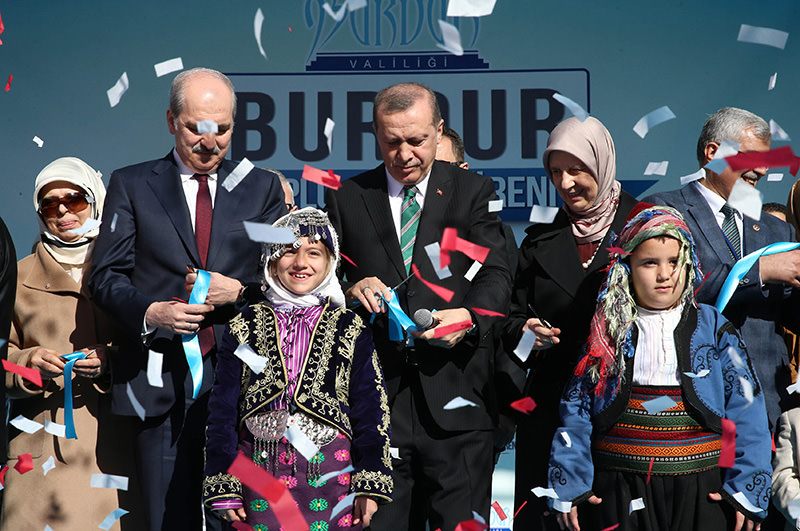 Turkey's conflict-ridden southeastern provinces will be rebuilt and the government, with all its officers, is ready to fulfil that duty, President Recep Tayyip Erdoğan said on Friday.

Speaking at an opening ceremony in the southwestern province of Burdur, Erdoğan said that the necessary responses to the terrorists will be made with modern projects and new regulations. He said: "Our government has authorized all of its officers. Now all the plans and projects in terms of infrastructure and superstructure will be carried out there and all the demolished places will be reconstructed in a very period of short time and in a much more modern way."

He added that the region will be reconstructed with turbines, water pipelines, natural gas and electricity supply systems.

Regarding the Gülen Movement, Erdoğan said that Gülenists had inspired women in headscarves to exploit their religious values during the events that took place in front of the movement-affiliated Zaman building.

"They have gathered our headscarf-wearing sisters to work hand in glove with the PKK during the elections in southeast," he said.

There have been reports that the movement, which is accused of trying to overthrow the democratically elected government through wiretapping and espionage after infiltrating state institutions, has intimate relations with the pro-Kurdish Peoples' Democratic Party (HDP) and made contact with the PKK several times in order to reach a deal to collaborate in their respective fights against the state.

According to intelligence reports obtained by the Sabah daily in October of last year, senior PKK leaders Murat Karayılan and Fehman Hüseyin, who is also known as "Bahoz Erdal," reportedly met several times with the Gülen Movement's imam in Iraq, Talip Büyük, and other senior Gülenist figures Cemal Bulut and Doğan Ertuğrul at a PKK camp in the Metina region of Northern Iraq.

Regarding the trustees appointed to the Zaman daily, Erdoğan said the fight against the movement will continue. Saying that they have infiltrated all institutions of the state, he warned: "No matter what you do, you cannot escape."

Regarding the Constitutional Court decision to release Cumhuriyet daily Editor-and-Chief Can Dündar and Erdem Gül, the paper's Ankara bureau chief, Erdoğan said the court decision was against the country.

"The dear president [of the Constitutional Court] had previously said it himself that they cannot announce a decision without preparing justification. However unfortunately, I really felt sorrow when this incident happened and I am calling him out from here, I am deeply offended."

"However, the trial court could have resisted in its decision. Show some resistance. Then let's see what the Constitutional Court will do in that case.

"This issue is not even remotely close to judicial independence. I, as the president, cannot be accused of any charge except treason. Then I am saying please observe Article 104 of the Constitution," he said.