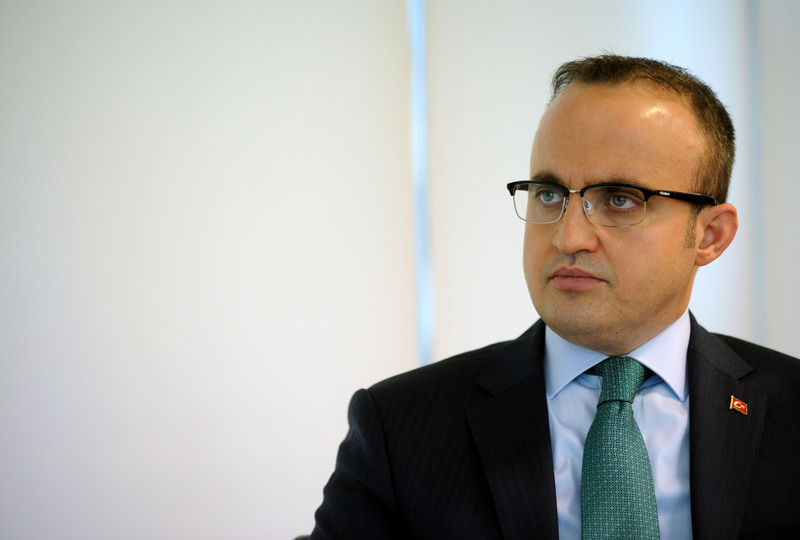 Speaking to Daily Sabah on the decision of the Constitutional Court to release Cumhuriyet daily's Dündar and Gül who are accused of espionage, AK Party's Turan said the court exceeded its authority.

The Constitutional Court recently sparked controversy with its decision to free Cumhuriyet daily Editor-in-Chief Can Dündar and Ankara bureau chief Erdem Gül, who are accused of espionage against the Turkish state. Justice and Development Party (AK Party) Parliamentary Group Deputy Chairman Bülent Turan commented on the issue in an interview with Daily Sabah.

Turan contended that the court exceeded its authority and violated the Constitution. Turan presented some examples when the Constitutional Court made a decision that took much longer than the one for the two editors. He also recalled President Recep Tayyip Erdoğan's case, which has been inconclusive for two years.

DS: The Constitutional Court recently decided to release Cumhuriyet's Dündar and Gül from pretrial detention. There was criticism of the court for the decision, saying that it violated the Constitution. What do you think?

On the other hand, the Constitutional Court's confines of authority regarding personal application are definite. It has to decide without interfering in the case. However, it has interfered with the case and enacted criminal procedure.

The cases of President Erdoğan and Istanbul deputy Burhan Kuzu, which were submitted two years ago, are still inconclusive. From the press, we also know that Deniz Seki's application was resolved after 13 months, while the application of Captain Murat Eren, who is being trialed in the Atabeyler case, has been resolved after 29 months. However, it took only 84 days for Can Dündar and Erdem Gül. We are still unclear about the criteria according to which the Constitutional Court has given priority to certain cases. The court should clarify this.

Ultimately, the Constitutional Court, with this decision, has exceeded its authority.

Being a deputy does not grant anyone the right to commit crime. It is especially embarrassing for a deputy to support terrorist activities which threaten the very foundations of political institutions. In all democratic systems, the immunity of deputies supporting such activities are removed immediately. Perhaps it is important to distinguish between immunity and freedom of speech. It is a right to be able to speak about any matter in Parliament, and it has to be done. As the AK Party, we completely support this. However, immunity is about actions. Actions may have serious consequences and certain criminal elements. Therefore we stress we are not against immunity itself, and do not find it right to remove a deputy's immunity only because of his statements. Yet just as immunity is important, so is the honor of the Parliament.

If we are considering the security of politics and law and seeing it as a democratic value, the aforementioned people have to be tried with their immunity lifted. The removal of immunity is not an act by the judiciary, but it is to allow the judiciary to act accordingly.

DS: What is your response to those claiming that the removal of immunity is a violation of freedom of speech and Turkey is returning to the conditions of the 1990s?

The deputies whose immunity was removed in 1994, were tried and arrested because of their speeches in the parliament. As I have expressed before, this is not the case now. Attending a terrorist's funeral and carrying armaments in the trunk of your vehicle are very different than giving speeches. These are some of the serious accusations about the deputies whose summaries will be discussed in the parliament.

To clarify, the AK Party does not desire the immediate arrest of the deputies; it can be done with a trial without arrest, while implementing a temporary ban on leaving the country. We hope that certain malpractices, which might result in arrest as in 1994, do not take place this time.

I have to express this once again; the proposition of lifting the immunity of certain deputies is not due to their speeches, but due to their taking almost leading roles in terrorist activities.

In addition, the issue of removing immunity is a subject on which parties cannot act as a singular unit. Therefore, these are only my personal opinions.

The judiciary wants to prevent the abuse of immunity for terrorist activities, and we are trying to allow judiciary to take this step. This is all that is happening.

DS: How will the process of lifting immunities proceed?

After these steps, a vote is held in the General Assembly. If the majority votes for the lifting of the immunity, it is accepted.

This is a procedure which can take place even in the most developed democracies and this is as it should be. The public is demanding this. People are respecting most of the statements of the deputies, as they see debate as part of the parliament. However, the public does not accept when deputies side with terrorists. Neither being a journalist nor a deputy grants one the right to commit crime.

DS: The Republican People's Party (CHP) has proposed the removal of all immunity, except regarding free speech in the parliament. What is the AK Party's disposition in this matter?

The CHP's proposal reveals a long-standing confusion. There are currently 470 summaries concerning deputies. When investigated, there are many common infractions, ranging from insults to traffic fines. If you say that all 470 summaries should be investigated further, it means that you are sabotaging the parliamentary activities. Regarding the recent summaries about the removal of immunities, I see that there is confusion among the CHP deputies. I am asserting that CHP is actually trying to avoid the investigations of the summaries by saying the opposite.

DS: What is the AK Party's road map, if the commission fails to produce a result?

Since 2011, we have advocated that the four parties which have seats in Parliament should make a new constitution. We took the lead in the creating of commission in which all parties had an equal number of delegates, regardless of their seats in Parliament. If the four parties cannot agree, we will seek an agreement between three parties. If this also fails, we will try to achieve it with two parties. If everything fails, we will propose our own draft constitution to the General Assembly. We are trying to fulfill our duty which is given to us by our people.

The parliamentary system has caused crises and coups in Turkey. Between the years of 1950 and 2002, we had 39 governments, which means a different government every sixteen months.

We last suffered a crisis due to the parliamentary system in June 7. While the AK Party had 41percent of the total vote, it was not able to form a government. Turkey had to hold snap elections. Therefore to prevent these kinds of crises, we have to implement a presidential system. We are advocating it because we believe it will bring stability; we are not advocating it for ourselves or President Erdoğan, but for the future of our people. Otherwise, there will be many crises.

In the past, our country witnessed clashes between presidents and prime ministers. Turgut Özal had problems with the True Path Party-Social Democratic Populist Party (DYP-SHP) coalition. Süleyman Demirel had conflicts with various governments. Ahmet Necdet Sezer and Bülent Ecevit had a conflict, even though they are from a similar political background. Turkey suffered an economic crisis in 2001, as Sezer threw the constitution at Prime Minister Ecevit during a National Security Council meeting.

The nonexistence of a conflict today is due to both President Erdoğan and Prime Minister Davutoğlu having similar political views. It is possible to have conflicts if there are presidents and prime ministers of different political views. If we are thinking about our country's future, we should implement a presidential system.

DS: How do you respond to the concerns that the Turkish presidential system will cause an authoritarian government?

In addition, we do not impose that our idea is the best. We want to be able to discuss the checks and balances with the other parties and decide what the best is. We want to implement the best model through examining other examples from all around the world.