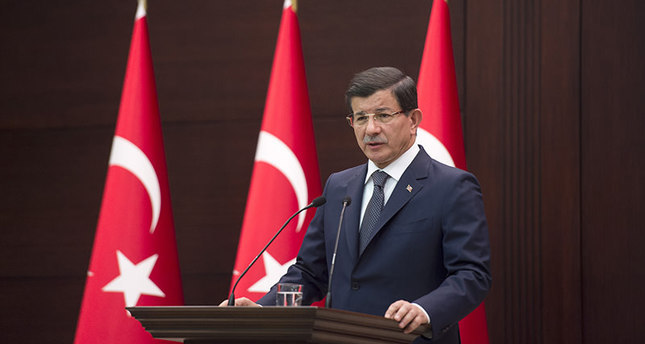 PM Davutoğlu proposed that Parliament lift the immunity from prosecution of all deputies and collectively review the 506 outstanding dossiers. Referring to the HDP, he said those who side with terrorist organizations should pay the price for their actions

Prime Minister Ahmet Davutoğlu on Thursday proposed that Parliament lift the immunity from prosecution for all lawmakers and collectively review the 506 outstanding dossiers. Parliament must look at the dossiers in one session in order to prevent delays to legislation required by the European Union to win visa liberalization with the bloc, Davutoğlu told a business group in comments broadcast live. Davutoğlu said that he was waiting for an answer from all the parties by the end of the day and that Parliament could review the issue as early as next week if the parties accept the proposal. With the dossiers waiting at the Justice Ministry and Prime Ministry, the number of motions in Parliament is expected to reach 550.

As of Thursday, there are 43 deputies from the main opposition Republican People's Party (CHP) facing the lifting of their immunity. This number is at 41 for the pro-PKK Peoples' Democratic Party (HDP) and 22 for the ruling Justice and Development Party (AK Party) and six for the Nationalist Movement Party (MHP). Many deputies have multiple cases launched against them.

"If there are people who visit some terrorist's funeral in such an environment, then they will have to account for that. There could be no political party in any part of the world that goes to the funeral ceremony of a terrorist," Davutoğlu said, referring to HDP deputy Tuğba Hezer who visited the home of Abulbaki Sömer, the perpetrator of the car bombing in Ankara last month.

Davutoğlu made the comments at the headquarters of the Confederation of Turkish Tradesmen and Craftsmen (TESK) in Ankara. He emphasized that tradesmen whose shops were damaged by the Ankara attack will be compensated. "Terrorist groups want to create chaos through attacks; we will not let that happen," he said.

Davutoğlu also said security measures have been taken in Ankara, Istanbul and across the country following this week's car bombing that killed 35 civilians in Ankara.

In response to Davutoğlu's call, main opposition CHP Vice Chairman Bülent Tezcan said that they are ready to discuss lifting immunity for all deputies in Parliament.

MHP's Group Deputy Chairman Oktay Vural also said that the party is in favor of lifting the immunities of all deputies except for those at the podium.

HDP once again failed to show solidarity in the face of terror and did not sign the declaration. Previously, the HDP refused to sign the joint declaration in February condemning the deadly Ankara terrorist attack, which killed 28 people and wounded 61. HDP deputies and chairpersons have repeatedly failed to condemn terrorist attacks carried out by the PKK and have been accused of adopting a pro-PKK policy following the elections.

The declaration follows calls on Monday by Deputy Prime Minister Numan Kurtulmuş to all political parties to take a common stance and issue a joint declaration against terrorism.

The declaration stated that the parties strongly condemned the terrorist attack, which had targeted the nation and the unity of the country.

"The terrorists' goal is to create pessimism among the people and to deal a blow to the sense of a common future," the declaration read, and added that Parliament is aware of their responsibilities.

The declaration also noted that the parties will display a determined stance against terrorism and will share the common pain of the nation, underscoring that these are more important than political ideology.

Sunday's bombing in Ankara was the third attack to target the Turkish capital in recent months.