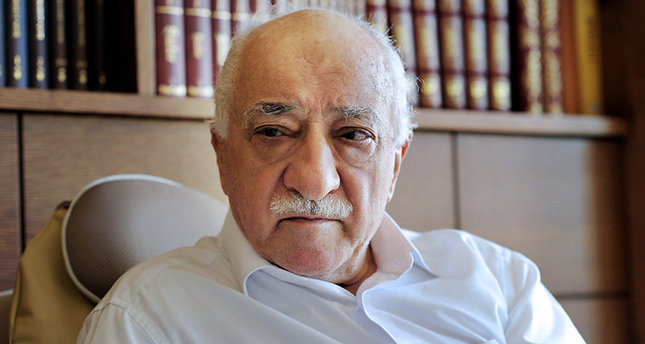 The Pennsylvania-based preacher once again imprecated his opponents and defended the members of his shadowy network in his latest sermon. Telling his followers to curse the Turkish officials, he also tried to motivate Gülenists against the recent crackdown on the network’s institutions and members

The leader of the shadowy Gülen Movement, U.S.-based former imam Fethullah Gülen, once again cursed his opponents in a sermon broadcast live on Sunday.

In the sermon recorded in his multi-million-dollar residence in the town of Saylorsburg in rural Pennsylvania, the self-exiled preacher cursed his opponents, this time not only the executives of Turkey's ruling Justice and Development Party (AK Party) but also many others. In his latest sermon, Gülen, whose movement is under scrutiny for terror and organized crime related charges in Turkey, openly imprecated the party's supporters and voters as a whole.

Nearly throughout the whole sermon, Gülen criticized the Turkish government and its officials, but near the end, he started imprecating.

Urging his followers not to be sorrowed by the Turkish government's recent crackdown on Gülenist institutions and senior figures, he told the listeners present at the hall to curse Turkish officials fighting against the alleged Gülenist infiltration into the Turkish state and AK Party voters, under the pretext of doing "mubahala," a method proposed by the Prophet Muhammad (Peace Be Upon Him) to settle the disputes between Muslims and Christians regarding the personality and status of Jesus. A mubahala is a 'mutual curse' in which Allah is called upon to act as a Judge (for example, "may Allah curse the one who is wrong").

"Wake up in the early hours of the morning and say: Dear God, if those [Turkish government and the security forces] detaining and arresting our brothers and sisters, who are building schools in over 170 states of the world and teaching our language and religion, are on the right path, mortify our brothers and sisters!" he said at the beginning of the imprecation.

After Gülen finished the first part of the mutual curse targeting Gülenists, all of the listeners stayed quiet.

"Dear God, if those detaining, arresting our brothers and sisters, are wrongdoing against innocent people; mortify them including whoever stays quiet like a mute Satan against these wrongdoings, set their houses on fire, cast them down, drag them down as soon as possible! Mortify whoever they are, from the lowest level to the highest ranks!" he added.

After he finished the second part of the mutual curse targeting Turkish officials, all of the listeners shouted 'amen.'

At the end of the sermon, Gülen labeled Turkish officials as "a group of underbred, witless people who fail to govern Turkey and bring Syria to ruins."

After slurring government officials, he asked whether the Turkish government and AK Party officials were "motivated by Satan" to fight against his clandestine network.

The Gülen Movement has been defined as the FETÖ/PDY, which stands for "Gülenist Terror Organization / Parallel State Structure" in records by many Turkish state institutions including the Ministry of Interior, the Security General Directorate and Istanbul Police Department. The "parallel state" defines a group of Gülenist bureaucrats and senior officials embedded in key posts of the country's institutions, including the judiciary and the police, and it is being accused of infiltrating into these institutions through cheating and blackmail.

The group is also being accused of using counterfeit documents and illegal wiretappings to launch probes against its adversaries through its links in the judiciary and the police.

The 17-25 December 2013 operations that targeted government officials and their relatives, which is suspected to have carried out by prosecutors and police officers linked to a clandestine network run by Gülen, are labelled as a coup attempt to overthrow then-Prime Minister Recep Tayyip Erdoğan's democratically elected government.

Gülen has also been listed as a wanted terrorist by the Turkish Interior Ministry.