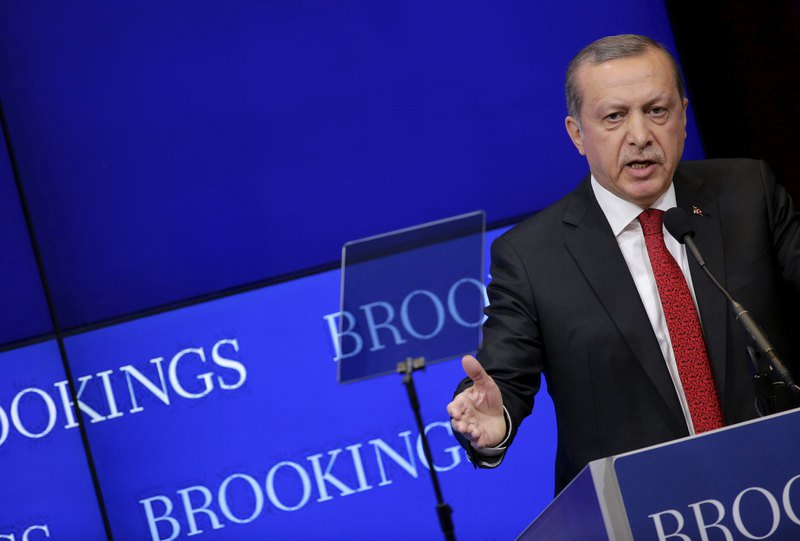 President Recep Tayyip Erdoğan called on the international community to assume the same attitude against the PYD/YPG as with other terrorist organizations, adding that the group's fighters are as dangerous as the fighters of Daesh.

"Claiming PYD/YPG groups are good terrorists because they are fighting against Daesh is unacceptable. These are the organizations that are auxiliaries of the PKK," Erdoğan said in a speech at the Brookings Institute on Thursday. He is in the United States for a nuclear security summit.

"International community should collaborate against all terrorist groups - the PYD, Al-Nusra, Boko Haram, Daesh - with the same level of earnestness," he demanded.

Erdoğan underlined that the PKK terrorist organization, which has fought Daesh in Syria and Iraq, was serving its own purpose. The United States has worked closely with PKK-affiliated Syrian Kurdish militias in its fight against Daesh.

The president also condemned a terror attack in the southeastern province of Diyarbakır that killed seven police officers and wounded 27, including many civilians earlier on Thursday, and said the attack showed the "ugly face" of militants as they were "cornered".

"We cannot tolerate this anymore. I hope [European countries and other countries] they can see the true face of terrorists in these attacks."

He also commented on the ongoing refugee crisis and said the main reason for the crisis was Assad, not the refugees fleeing to Europe from Syria.

The president suggested that a no-terror zone could be established in the northern parts of Syria to accommodate the refugees and stem the refugee influx into Europe.

Erdoğan also said that he expected a meeting of Turkish and Israeli officials next month to yield positive results, after the sides collaborated closely following a bomb attack in Istanbul that killed Israeli tourists.

The Daesh suicide bombing that killed three Israeli tourists and an Iranian in central Istanbul on March 19 was not just an attack aimed at Israel, Erdoğan said in his speech.