PKK, YPG, ASALA, Gülenists were side by side in the US, Erdoğan says 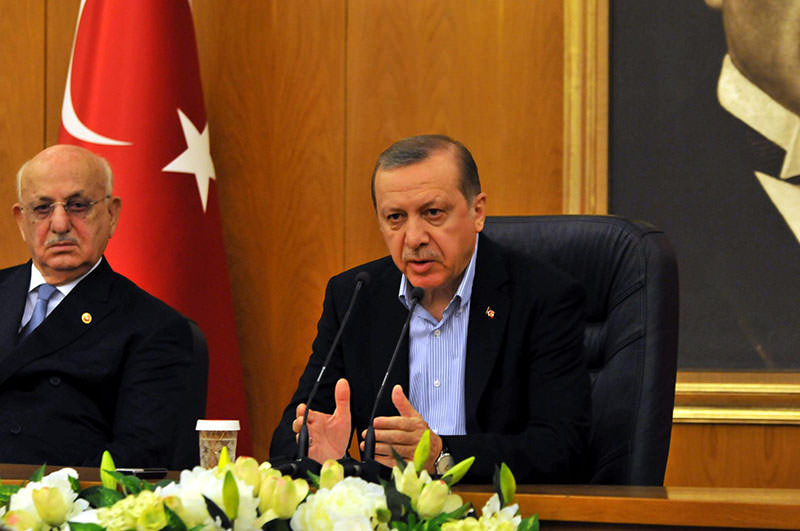 President Recep Tayyip Erdoğan said on Sunday that during his visit to the U.S. he had seen the representatives of the PKK terrorist organization, its Syrian offshoot People's Protection Units (YPG), the Armenian Secret Army for the Liberation of Armenia (ASALA), and the Gülen Movement together cooperating with each other.

The president made the comments in a press conference held at Istanbul's Atatürk Airport, right after arriving Turkey from U.S.

The president said that he was invited to speak at Brookings Institute while in Washington (for the Nuclear Security Summit), in front of which he saw "representatives of the PKK terrorists organization, YPG, ASALA, and parallel state, who previously fled Turkey and currently live in the U.S., standing side by side and live in each other's pockets."

"This was a proof, evidence. This is why I call on my naive, pure brothers who support parallel state to be conscious about whom they are with," the president said.

"You need to know how the U.S. branches of the [PKK] terrorist organization in our country is nested with the parallel state structure, especially in the U.S.," Erdoğan said, adding that the representatives of the Gülen Movement were "not shedding tears for those martyred [soldiers, policemen]" in Turkey.

There are ongoing probes and judicial processes against the Gülen Movement, which has been defined as the Gülenist Terror Organization / parallel state (FETÖ / PDY), for plotting against the government through operations launched by its members in the judiciary and police through illegal wiretappings and false evidence. It is also being accused of infiltrating in state institutions through cheating in public exams.

There should be sincere international cooperation against terrorist attacks without discriminating where it ocurs, pointing to attacks in İstanbul, Ankara, Brussels, Lahore and Paris, Erdoğan said.

"I underscored [at the summit] that sincere international cooperation should be made for a global fight against terror without discriminating in the face of recent terrorist attacks in İstanbul, Ankara, Brussels, Lahore and Paris," he said.

Regarding the issue, President Erdoğan told a group of journalists on Friday that turning a blind eye to terrorist attacks in Turkey and Pakistan is not acceptable, while everyone keeps mentioning the Paris and Brussels attacks. "Only a couple people have touched on the terror attacks in Turkey. Only one person touched on Lahore. The others content themselves with speaking about Paris and Brussels. However, we are a country that has lost 40,000 lives from terror. Ignoring it is not acceptable," he asserted. The president also slammed such countries for speaking of the fight against terror, but doing nothing. "The fight against terror does not work with rambling on about it in vain," he said.

'Obama did not raise press freedom issue with me'

On Friday evening President Erdoğan told a group of journalists that U.S. President Barack Obama did not raise press freedom issues with him in their meeting on the sidelines of the Nuclear Security Summit. "I am sad that he made such a statement in my absence. When we met at the White House he did not raise these issues."

A White House spokesman did not deny this statement, but said President Obama and Erdoğan had spoken quite frequently in recent months. National Security Council Spokesman Mark Stroh said they were not going to detail the conversations beyond the already issued readouts, adding, "But the president has certainly raised this issue, as he indicated."

Obama and Erdoğan had two phone calls in January and February. However, the readouts did not mention press freedom issues, but rather focused on the fight against DAESH and issues within Syria.

Some Turkish journalists believe Obama might have mentioned his concerns regarding the state of press freedom in Turkey during calls and meetings between Obama and Erdoğan last year. President Obama said on Friday that he was "troubled" by certain trends in Turkey.

Obama refused to give a yes or no answer when asked whether he considered the Turkish leader to be authoritarian. "It's no secret that there are some trends within Turkey that I have been troubled with," Obama said. "I think the approach they have been taking toward the press is one that could lead Turkey down a path that would be very troubling." Obama said he had expressed these sentiments to Erdoğan "directly."

Erdoğan refuted the assertions and said that even in Western countries, such as the U.S. and Germany, there is no tolerance for insults and threats against heads of states. "You need to know how the U.S. branches of the terrorist organization in our country [PKK] is nested with the Parallel State Structure, especially in the U.S.," Erdoğan said, adding that representatives of the Gülen Movement were "not shedding tears for those martyred [soldiers, policemen]" in Turkey.

Erdoğan's encounter with an Azerbaijani reporter

The president also spoke on the incident in which Azerbaijani reporter Ganire Atasova who could not hold her tears while asking Erdoğan about his reaction to the 12 Azerbaijani soldiers killed by Armenian forces in the occupied Karabakh region on Saturday.

During Sunday's press conference, Erdoğan said, "The incident in Maryland was very meaningful…She [Atasova] is also a reporter, ours [in Turkey] are also reporters. I of course exclude media members here, but journalism is not swearing at the president of this country and his family. The scene there should be taken as a lesson."

Atasova, 36, from Azerbaijani ANS television was one of the dozens of journalists who tried to get close to Erdoğan as he neared the stage to deliver opening remarks for the Diyanet Center of America-a new Turkish social complex, including a mosque.

It was only minutes after she had heard the news that her nation had reclaimed land occupied by Armenia during clashes Friday and Saturday which killed a dozen Azerbaijani soldiers, and led her to push through the crowd and reach Erdoğan despite his security detail.

"When I heard the news and the moment I asked the president about the martyred soldiers, I was moved to tears," Atasova told Turkey's state-run news agency, Anadolu Agency (AA), in an exclusive interview.

"As a reporter I have to hide my feelings but bear in mind that I'm a mother, a woman, and I have two children, two sons. The soldiers who were martyred were my sons as well and I felt that pain."

'Azerbaijan is ready for ceasefire if Armenia goes first'

Erdoğan has also touched upon the recent tension between Azerbaijan and Armenia regarding the Karabakh region. The president said that he had already spoken with his Azerbaijani counterpart Ilham Aliyev and Azerbaijan was ready to declare a ceasefire if Armenia first does the same.

"When I heard about the issue, I called my brother Ilham Aliyev. He was on way to the airport to return to Azerbaijan. We extended our condolences and at that time, the clashes were continuing. However, I just learned that Azerbaijan is ready to declare a ceasefire if Armenia first declares a ceasefire," Erdoğan told reporters.

Azerbaijan reclaimed land occupied by Armenia during the clashes on Friday and Saturday, which saw 12 Azerbaijani soldiers killed.

Azerbaijan's Defense Ministry said that its army had launched operations in the Agdere, Terter, Agdam, Hocavend and Fuzuli regions to protect civilian lives.

During the operation, the Azerbaijani Army reclaimed some strategic hills and residential zones.