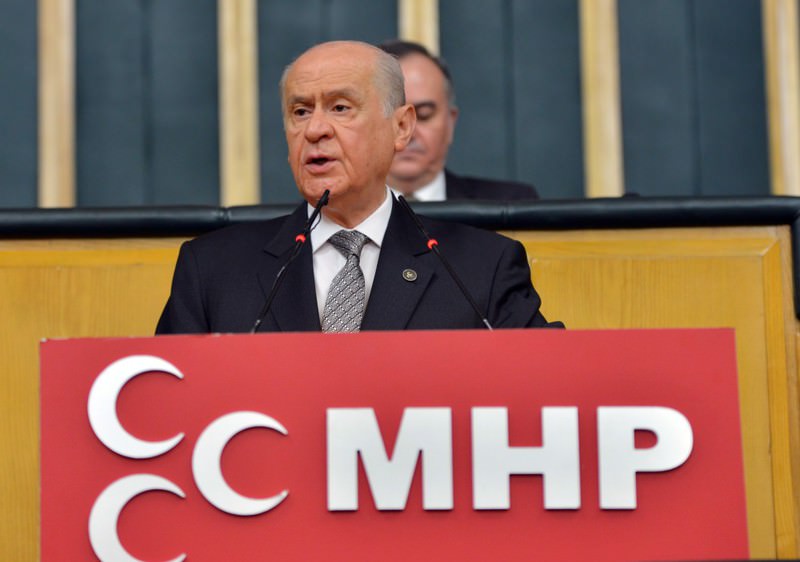 MHP Chairman Bahçeli expressed his party's support for the government in its fight against groups that stand against Turkey, including the Gülen Movement. He also called on the government to raze all operational areas in the southeast where the PKK is dominant after evacuating locals

It is a duty of the government to purge all Gülen Movement-linked structures, traitors and all of those who stood against Turkey, Nationalist Movement Party (MHP) Chairman Devlet Bahçeli said during the MHP group meeting at Parliament yesterday.

Referring to the "parallel structure," which is used by government officials to refer to the Gülen Movement, Bahçeli said that all structures in state institutions that are against Turkey must be dismantled.

He said it is necessary that the government "announce who they are name by name" and "exterminate them."

In his previous speech at the MHP group meeting last week he said his party would not let the Gülen Movement design Turkish politics from overseas.

Claiming that Turkey has had enough of the Gülen Movement, Bahçeli said: "I stress wholeheartedly that we will not give credit or lend support to political designs originating overseas."

Bahçeli also claimed a candidate was the political tool of the movement in December 2015, saying: "[T]here is one candidate who joined the MHP as a political figure of the Fethullah Gülen Movement."

That candidate is speculated to be Meral Akşener, a former MHP deputy and strong figure within the party. She has denied all the allegations.

Fethullah Gülen, the retired imam who leads the Gülen Movement, is among Turkey's most wanted, with Ankara exerting a tremendous effort to obtain an international arrest warrant for him. He lives in a compound owned by his movement in Saylorsburg, Pennsylvania. Ankara is seeking to secure his extradition from the United States.

Turkish authorities designated the Gülen Movement, which has seen members and sympathizers purged from state institutions, including the police and judiciary, over the past three years, as a national threat, a classification used for terrorist organizations. A string of judicial inquiries over the past two years has revealed the seedier side of the movement, which promotes itself as a charity group that runs schools and works for interfaith dialogue.

Gov't should evacuate operational areas and raze them

Bahçeli also said the government should urge citizens who live in areas where operations are in the southeast to leave, so the scope of the operations can be extended.

"My advice for the prime minister is this: Make a call to our citizens who live in Nusaybin and other operational cities and districts. Give them three days and take everybody to safe places by providing evacuations of the cities," he said, adding that the cities and districts should be razed after this process.

Prefacing that the MHP gives clear support for anti-terror operations and always sides with the state and security forces, Bahçeli said: "We prioritize all assessments about the historical right and interests of our state and perpetuity and security of our nation from politics."

He also avowed to lift the parliamentary immunity of pro-Kurdish Peoples' Democratic Party (HDP) deputies. The HDP has been accused of not taking a clear position against PKK terror. Bahçeli called on the government to refer those who are involved in terror activities to justice.
RELATED TOPICS