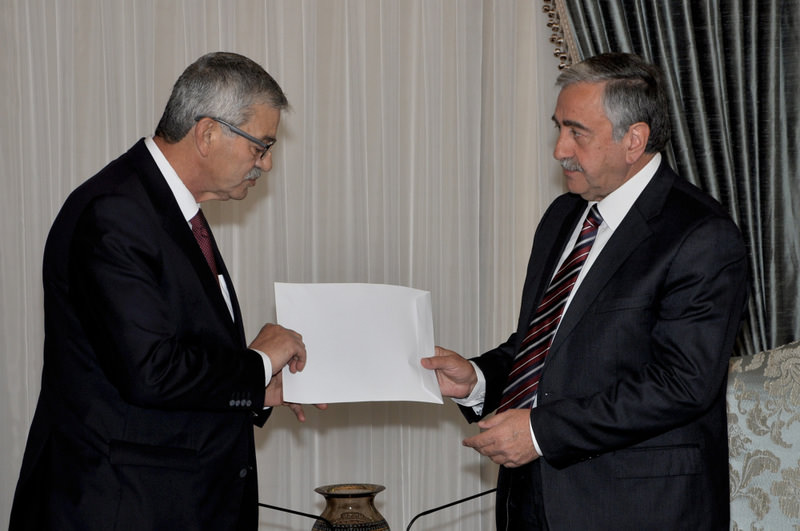 Turkish Cypriot Prime Minister Kalyoncu (L) submitting his resignation to President Aku0131ncu0131 after his coalition partner withdrew from the government.
by Merve Aydoğan Apr 07, 2016 12:00 am

Cyprus reunification talks, which also play a crucial role in Turkey's EU accession bid, may be delayed after the coalition in the country was dissolved and the prime minister submitted his resignation to the president. A possible political crisis in Turkish Cyprus could negatively affect the process

Following Turkish Cypriot Prime Minister Ömer Kalyoncu submitting his resignation on Monday after the withdrawal of the government's National Unity Party (UBP) coalition partner, the junior partner in the wide-based coalition with the Republican Turkish Party-United Forces (CTP-BG), some experts expect the ongoing reunification talks to face delays. Speaking to Daily Sabah on Wednesday, the editor-in-chief of the Turkish Cypriot newspaper Havadis, Başaran Düzgün, said that Turkish Cyprus plunging into a political crisis would negatively affect the reunification talks. A recently published Eurasia Group note said that although the reunification talks would face delays, they would not be derailed. While some experts believe that a political crisis could affect the talks, the director of the Global Political Trends Center (GPOT), Professor Mensur Akgün, said political crisis would not directly affect the talks, as Turkish Cypriot President Mustafa Akıncı is the chief negotiator in the talks.

Kalyoncu's resignation came after the coalition between the UBP and CTP-BG collapsed as reunification talks on the island are slowly reaching a conclusion. Commenting on Kalyoncu's resignation and the collapse of the coalition, UBP Chairman Hüseyin Özgürgün said the party decided unanimously to withdraw due to what it says is the government's inability to address the country's economic problems. Akıncı and Greek Cypriot President Nicos Anastasiades have expressed optimism on reaching deal in 2016 following 11 months of talks. Akıncı has urged the Turkish Cypriot political parties to form a new government as soon as possible.

Regarding the latest development on the Mediterranean island, the Eurasia Group report said: "Early elections are likely to yield a right-leaning government, as Kudret Özersay's newly founded center-right Peoples' Party (HP) is likely to secure the most votes, snapping up swathes of voters from the leftist CTP and right-wing UBP who are disillusioned with the current political landscape." The report further said that the chances of reunification must not be undermined by expected delays. Echoing Akıncı's recent statement that talks are expected to progress at a slower pace, the report said "a referendum date for reunification [should] only [be] in the fourth quarter of 2016."

Commenting on the issue, Düzgün agreed with the Eurasia Group report, as he said that the bilateral talks on the divided island are close to reaching an agreement. He stressed that a political crisis is the last thing that Turkish Cypriots want and that such a crisis is likely to cause delays. He said that the political crisis is already causing a loss of interest in the talks for Greek Cypriots, while they prepare for elections. However, Akgün said that the reunification talks are being held by the chief negotiators, which at the moment are the presidents. Because of the makeup of the delegations, he said that governments resigning or changing would not directly affect the talks, but rather may cause fragility. He said that the talks are an ongoing process and the will of the people is what matters.

The island was divided into a Turkish Cypriot government in the northern third and a Greek Cypriot government in the southern two-thirds of the island after a 1974 military coup by Greece was followed by an intervention by Turkey as a guarantor state. Border gates between Turkish and Greek Cyprus were opened in April 2003. A "United Cyprus Federation" has been on the agenda of resumed reunification negotiations with Greek Cyprus, Akıncı said in July. The guarantor statuses of Turkey, Greece and the United Kingdom have also been left out of the debate so far, according to Akıncı.
RELATED TOPICS