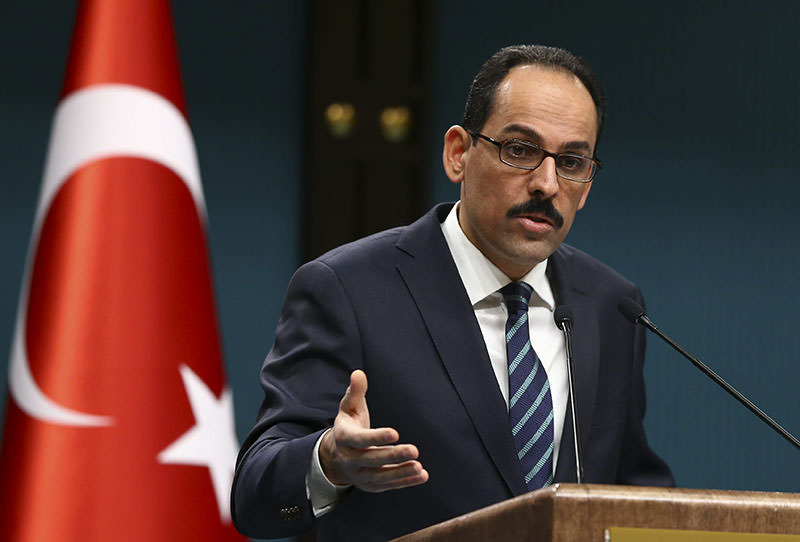 Presidential spokesperson İbrahim Kalın has called for a new approach for the anti-DAESH strategy, which would enable Muslim and Western countries to work together.

Kalın made the comments while addressing the conference, "Rethinking Violent Extremism in the MENA Region," held jointly by Al-Sharq Forum and the Afro-Middle East Centre (AMEC) in Istanbul on Saturday.

Kalın said: "The current strategy, which has focused primarily on airstrikes on DAESH targets in Syria and Iraq, has failed to stop the terrorist group from striking in Syria, Turkey, Europe and the U.S."

Kalın asserted that the civil war in Syria feeds DAESH and other terrorist groups. "The longer we let this war continue, the deadlier DAESH terrorism will become. DAESH reached its current level of network and impact primarily because of the wars in Syria and Iraq," he said.

Reiterating the line from other government officials, Kalın said there are no good or bad terrorists.

"Regardless of ethnic, religious or political motives, terrorism is terrorism everywhere. It is neither logical nor moral to treat DAESH as a terrorist organization that struck in Paris and Brussels, but not the PKK that struck in Ankara twice over the last two months," he said.

He said that PKK terrorism could not be justified in the name of fighting DAESH in Syria.

"As the recent Ankara and Istanbul attacks show, DAESH and the PKK, although coming from opposite ideological-political backgrounds, are united in their terrorism directed at Turkey," Kalın said.

DAESH has been linked to a number of other suicide bombings in Turkey.

In addition to the Jan. 12 Sultanahmet blast that claimed the lives of 12 German tourists, the group also carried out the March 19 attack on Istanbul's İsliklal Avenue, which killed three Israelis, two with dual U.S. citizenship, and an Iranian.

The last blast in Istanbul also injured 45 others. The bomber was identified by authorities as Mehmet Öztürk, who was born in southeastern Gaziantep province in 1992. Öztürk is suspected of having links with DAESH.

A twin suicide bombing by DAESH in Ankara also claimed 103 people's lives in October 2015 at a peace rally.

Kalın also said that violent extremism is a global phenomenon that has many causes, including religious, secular or nationalist ideas.

"There is more than one reason for the emergence of violent extremism and we need to adopt an integrated approach to understand its causes and operate at several levels to contain and prevent it," he said.

He said fighting them would require a battle of ideas in which attempts to justify terrorist methods are rejected based on authentic and authoritative sources.

"In the case of DAESH, Muslim scholars and religious leaders have debunked its extremist ideology and shown the fallacy of their logic," he said.

Noting that DAESH terrorists and others use the Syrian civil war to spread their extremist ideologies and recruit new members, Kalın said: "Caught in between violent extremism and anti-Muslim bigotry, ordinary Muslims are victimized twice.

"They suffer from the brutal attacks of DAESH in places like Syria and Iraq, as DAESH has killed far more Muslims than non-Muslims. On the other hand, the Islamophobes who use DAESH terrorism to make cheap political points on the anti-Muslim wave, subject ordinary Muslims to discrimination."

Kalın said blaming others did not solve problems, but rather have led to intellectual laziness and moral conformism.

"It is meaningless to blame the West or the international system for the ill fortunes of the Muslim world without first stopping the internal bleeding in Muslim societies," he added.