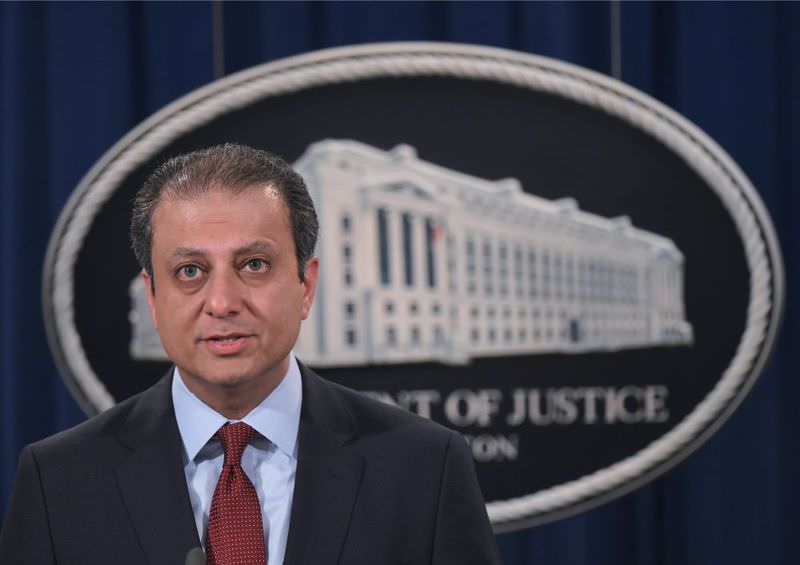 by Ragıp Soylu - Yunus Paksoy Apr 12, 2016 12:00 am
U.S. attorney Preet Bharara, who has been at the top of the agenda recently in Turkey due to his arrest of Turkish-Iranian businessman Reza Zarrab, had prepared an indictment and set free an FBI informant who orchestrated cyberattacks on the Turkish government.

Hector Xavier Monsegur, also known as Sabu, was a hacktivist when he was caught by the FBI in June 2011 and given a choice to collaborate in taking down the network of other hacktivists. Having begun his tenure as an FBI informant, Sabu proved to be an efficient asset for the FBI by playing a key role in the arrest of Jeremy Hammond, a wanted hacker working for Anonymous at the time.

Sabu recruited other hackers and carried out attacks on Turkish government websites in 2011 and 2012. AntiSec, Sabu's hacktivist group, became close with a group of Turkish hackers, RedHack, and launched attacks on the aforementioned websites. RedHack hackers sent special thanks to AntiSec on the pages of websites that they hacked. The two groups cooperated in taking down Turkish government websites at the time.

When an FBI spokesman in New York was asked about it by the Sabah daily after an article on the Daily Dot was published in August 2014, it was advised to look at the government's sentencing memorandum on Jeremy Hammond. The memorandum prepared by US Attorney Preet Bharara said, "These claims are baseless. While the cooperating witness [Sabu] and Hammond did discuss vulnerabilities of foreign governments, (among others), in fact, the FBI notified foreign governments about the this activity and vulnerabilities in their websites after Hammond was arrested and the cooperating witness [Sabu]'s role could be revealed without harming the investigation so they could take appropriate remedial action."

Ankara, however, has not made any comments so far regarding whether it had had any knowledge of the attacks by Sabu or Hammond.

In the indictment that Bharara had prepared to release Sabu, he calls the hacker "an extremely valuable and productive cooperator."

Bharara became known in Turkey last month when he arrested Zarrab. He accused the Turkish-Iranian businessman of evading U.S. sanctions on Iran. Some in Turkey think that the case could spread to Turkey should Zarrab confess.

Bharara, however, brought speculation to an end with recent remarks that the case has nothing to do with Zarrab's arrest in Turkey. Zarrab's trip to the U.S. was not a planned one, Bharara added.

Some in Turkey now speculate whether Bharara knew of the cyberattacks on Turkish government websites or gave orders to do so at the time of the Gezi Park protests across the country. Daily Sabah asked Bharara's office whether the claims are true. Bharara's office dismissed the claims that Sabu had led the cyber-attacks against Turkish government websites. The office also said it has no comment regarding the issue.

NOT POSSIBLE THAT FBI DID NOT KNOW

ESMEDYA digital group Editor-in-Chief Yusuf Özhan, who recently broke the news that it was Bharara who released Sabu, spoke to Daily Sabah on the issue. Özhan questioned whether Bharara knew that Sabu was carrying out cyberattacks on Turkish government websites.

Özhan also pointed to the indictment that Bharara prepared to release Sabu, in which he spoke very highly of him.

When asked about whether it was possible for the FBI to not have any knowledge of attacks on Turkish government websites, Özhan ruled it out, claiming: "It is impossible that the FBI did not know it."

"The attacks started in 2011 and continued in 2012 as well until Hammond was jailed. It is unknown whether the attacks were orchestrated by the FBI in 2013 at the time of Gezi protests," he contended.
RELATED TOPICS