MHP will not be handed over to Gülenists, Chairman Bahçeli asserts 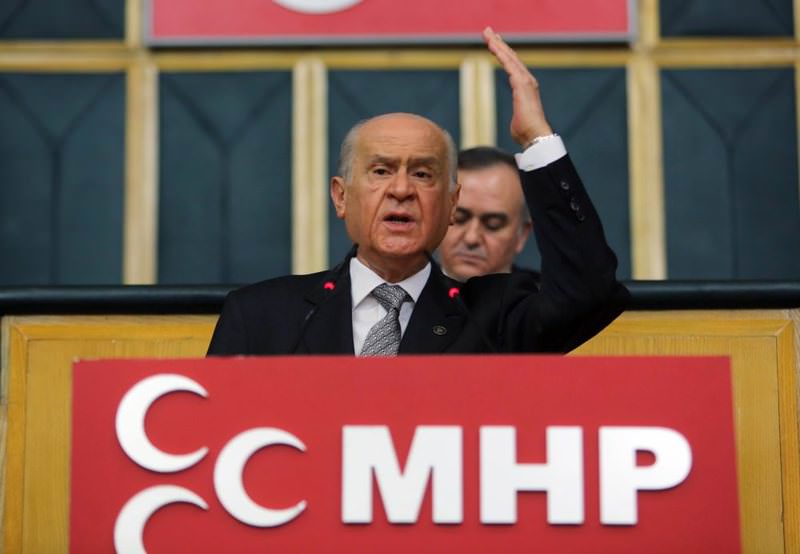 Continuing his staunch rhetoric against party dissidents that demand an extraordinary congress in early May, MHP Chairman Bahçeli ruled out any possibility for a congress in the near future and said yesterday that the party will never be handed over to the Gülen Movement

There is no party to hand over to the Gülen Movement and no one should expect an extraordinary congress to be held, Nationalist Movement Party (MHP) Chairman Devlet Bahçeli said at his party's parliamentary group meeting on Tuesday.

"We have no party to hand over to the 'parallel [structure],' " Bahçeli said, adding that the date for a congress is March 18, 2018. Claiming that the Gülen Movement wants to design Turkish politics through the MHP, Bahçeli contended that it will never reach this goal. "I see people who scream out with joy. No one should have desires in this vain," he said.

Railing at the Gülen Movement, Bahçeli accused what he called movement-affiliated people of hypocrisy over the appointment of trustees to the party. "I am telling this group that raised hell when trustees were appointed to their institutions: You deserve everything you have experienced so far. These [people] are hypocrites," Bahçeli said. He also labeled Gülen Movement-affiliated people as "the puppets of the U.S. and a disgrace to Islam."

Bahçeli's statement in early December 2015 came as a shock when he called one of the dissidents "a political figure of the Gülen Movement."

"There is one candidate who joined the MHP as a political figure of the Fethullah Gülen Movement," he said.

Even though Bahçeli did not cite her name, Akşener dismissed the claim, saying: "I have no connection to the Gülen Movement. I would have proudly said if I had."

Her remark was interpreted by some as a sign of her connection to the controversial movement. The appointment of trustees was hailed by prominent Gülen Movement figures. Akşener has been endorsed by the same figures as well.

GÜLENISTS MAY WANT TO CAST DOUBTS ON PROCESS

Özcan Yeniçeri, who was previously an MHP deputy and then sided with Özdağ as a dissident, spoke to Daily Sabah on the issue. When asked about the support Akşener receives from Gülenist circles, Yeniçeri postulated there could be a possible attempt by the movement to cast doubt on the process in the party. "Uslu, Ilıcak or their group [all Gülenists] may be backing Akşener to create doubt. I would talk about whether Akşener is sufficient for the position or not. However, I would not comment on whether she is a Gülenist," he said.

Underscoring that Bahçeli is doing the right thing to back the crackdown on the Gülen Movement, Yeniçeri asserted that there should be even more efforts.

Claiming that Bahçeli takes his position in accordance with conjuncture, Yeniçeri asked why he did not say anything about Akşener when she served three terms in Parliament or why he appointed her as deputy parliament speaker.

Bahçeli's stance is good for the total fight against the "parallel structure," yet his anti-Gülenist attitude coincides with demands for an extraordinary congress, Kürşad Zorlu, an associate professor and columnist for the Yeni Çağ daily said.

Speaking to Daily Sabah, Zorlu said it is not appropriate for the nationalist movement to be polarized over Bahçeli's stance. "Our state should collectively fight against this '[parallel] structure' and other similar ones with all its institutions," he said, adding that democracy requests within the party should not be affected by it.

When asked about whether Bahçeli's seat is in danger, Zorlu said there is an increasing trend in the party and the public that the MHP may win elections should Bahçeli leave or be replaced. "Blocking the decision to gather a congress by the court or postponing it will not stop these demands or expectations," he added.
RELATED TOPICS