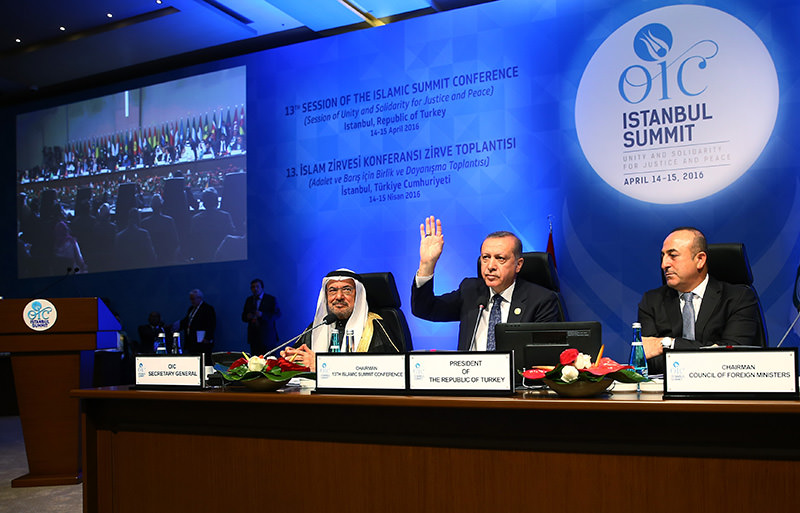 In his closing speech at the 13th Organization of Islamic Countries (OIC) Summit Conference on Friday, President Recep Tayyip Erdoğan said that Muslims should be able to solve their own problems without resorting to outside assistance. "Why are we expecting others to solve the problems of Muslims? We should be able to solve our own problems. The OIC shall be there for eventual purpose."

Stressing the importance of the OIC as a full-fledged platform for solidarity and unity, he said the Muslim world needs peace and prosperity as its values, which are currently lacking, as exemplified in the problems that it is encountering. Touching on the terrorism problem that victimizes Muslims globally, Erdoğan said the question of why Muslims suffering the most from terrorism must be asked. "Why do Muslim nations suffer from terrorism the most? Who is behind this terror? Which countries stand behind this issue? This needs to be addressed."

Regarding sectarian conflicts in the region, Erdoğan said they are provocations that Muslims should avoid: "We are not Shiite, or Sunni or something else. We have only one religion."

He also condemned DAESH's expansion in the region and said Islam is a religion of peace. "DAESH develops its attacks continuously in the region and they lead to destruction with the claim of doing it in the name of Islam. They have nothing to do with Islam," he said, adding that Turkey has been fighting the PKK and other terrorist organizations for the past 35 years.

Erdoğan also criticized Russia for its support of the PKK- affiliate in Syria, the Democratic Union Party (PYD) and its armed People's Protection Units (YPG). "Terrorism gives way to more terrorism. Russia openly said that they are arming the YPG and they also allow them to open branches. It is clear who is siding with terrorism. "

He said that OIC member states, while aware of the differences between themselves, have reaffirmed their commitment to strengthening unity and solidarity and working hand-in-hand to overcome the obstacles facing Muslim countries, including Azerbaijan, Pakistan, Palestine and others. He also said there is not a single country in the Muslim world that has reached unity, peace and concrete solutions, and they are in crisis as their natural resources are exploited. "Eighty percent of Iraqi oil reserves are shared by non-Iraqis who invaded Iraq," he said, and added that the same is also true for Libya.

He also said that the Red Crescent should be unified under a single roof and transformed into the most efficient aid agency in the world, providing assistance to both Muslims and non-Muslims alike.

"I believe that with the Istanbul summit we are conveying a message of justice and peace not only to Muslims, but to the entire world," Erdoğan said in his closing remarks, highlighting the importance of cooperation between OIC member states.

The OIC, which is the second-largest intergovernmental organization after the United Nations, met in Istanbul for its 13th session April 14-15 to address the problems facing Muslim countries, with its main focus on those caused by sectarianism and terrorism.

Iran was condemned in the joint declaration after the summit for meddling in the domestic politics of regional countries. The statement stressed the necessity of developing cooperation with Muslim countries and also condemned the attacks on Saudi missions in Iran in January. Tensions mounted after Saudi Arabia executed 47 people, including four Shiite Muslims, including the prominent cleric Nimr al-Nimr, a move that triggered protests and the storming of the Saudi Embassy in Shiite Iran.