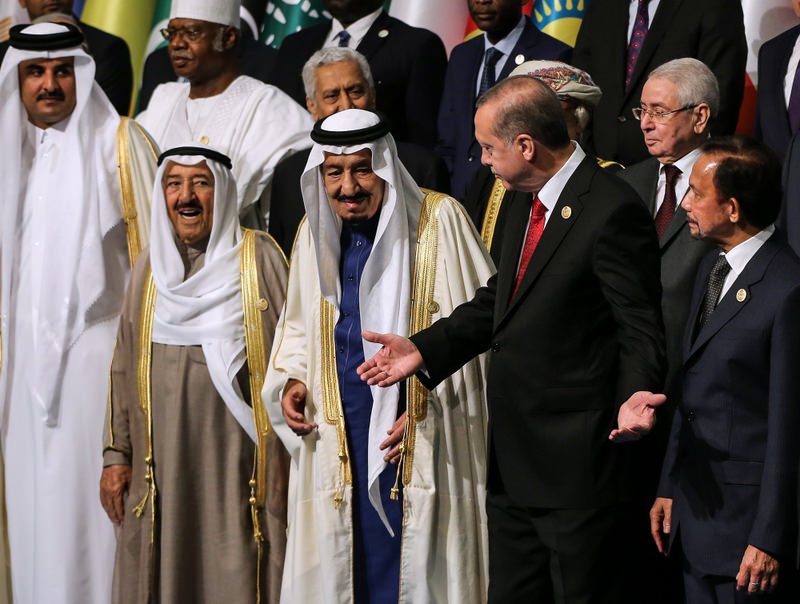 The13th OIC Summit Conference began Thursday with an opening speach by President Erdoğan, who said member states had reacted positively to Turkey's suggestion to establish an OIC-wide international police body to fight terrorism and other crimes

Organization of Islamic Cooperation (OIC) Member states agreed to establish an Istanbul-based police cooperation and coordination center to tackle terror and other crimes, President Recep Tayyip Erdoğan said Thursday at the 13th OIC Summit Conference, held in Istanbul. "It would be helpful to establish a structure among member states that will strengthen and institutionalize cooperation against terror and other crimes," Erdoğan said, adding that Turkey's proposal to realize this with an Istanbul-based center, under the formal name of OIC Center for Police Cooperation and Coordination, was approved by member states. His remarks came at the opening ceremony of the OIC summit.

Erdoğan said that all Muslims must overcome sectarian temptations that instigate hostility. "I believe the greatest challenge we need to surmount is sectarianism. My religion is not that of Sunnis, of Shiites. My religion is Islam," he asserted. Erdoğan also said that terrorist organizations that attack and kill innocent people in the name of Islam and other Muslims cannot be representatives of the "noble religion." "We should be uniting. Out of the conflicts, the tyranny, only Muslims suffer," he said, adding that the summit meeting could be a "turning point" for the whole Islamic world. Saying that terror is one of the gravest problems facing the Islamic world, he decried the devastation in Afghanistan, where hundreds of thousands been killed.

"Now DAESH, which controls areas in Iraq and Syria and is trying to get control of Libya, serves the same dirty plans. We see Boko Haram and Al Shabaab, which conduct terror attacks in Africa, as belonging to the same category. Apart from a few attacks done for publicity, all these terror organizations oppress and harm all Muslims," Erdoğan stressed.

Erdoğan underscored that Muslims should be united and urged them to strengthen mutual dialogue.

Touching upon the latest Nuclear Summit in Washington, he expressed his dismay about the West's one-sided approach by turning a deaf ear to the attacks in Istanbul, Ankara and Lahore and focusing solely on Paris and Brussels.

The president also touched on the lack of Muslim representation at the United Nations Security Council (UNSC) and said that the system needs to be reformed.

"The injustice that entails the lack of a Muslim nation represented at global decision-making mechanisms is a source of discomfort," he said, and added that the world no longer has World War I conditions.

Facing these challenges, the organization is expected to produce concrete solutions to relieve the problems brought by humanitarian crises in the Muslim world by using is its economic potential in particular, thanks to the membership of rich Gulf countries and economically rising powers.

President Erdoğan hosted a dinner in honor of the leaders of the OIC member countries on Wednesday in the historical presidential yacht MV Savarona. He boarded the yacht anchored in Istanbul's Kuruçeşme coast with Azerbaijani President Ilham Aliyev.

On Thursday, the leaders of the Islamic world gathered in Istanbul for the 13th session of the Islamic Summit Conference as Muslims around the world call on them to find solutions for the many problems facing the Islamic world, especially the violent wars caused by sectarianism and their dire humanitarian consequences.

All 57 members of the Organization of Islamic Cooperation (OIC), which spans across four continents, sent delegates, with many represented by their heads of state, in this important meeting where President Erdoğan, as the chair of the summit, is expected to set the tone for the proceedings to channel the resources of the Islamic world to address the rising threats of Islamophobia and sectarianism, along with resolving the current problems in Syria, Yemen, Libya, Afghanistan, Somalia, Mali, and Armenia's aggression toward Azerbaijan. With this in mind, Turkey chose the summit's theme as "Unity and Solidarity for Justice and Peace."

HISTORY OF THE ORGANIZATION

With 57 member states, the Organization of Islamic Cooperation (OIC), formerly the Organization of the Islamic Conference, is the second-largest intergovernmental organization after the United Nations . The organization is the collective voice of the Muslim world and works to ensure the safeguarding and protection of the interests of the Muslim world in the spirit of promoting international peace and harmony. The organization was established after a decision at a summit in Rabat, Morocco, on Rajab 12, 1389 Hijri (Sept. 25 1969) as a result of the criminal arson attack on the Al-Aqsa Mosque in occupied Jerusalem.
RELATED TOPICS