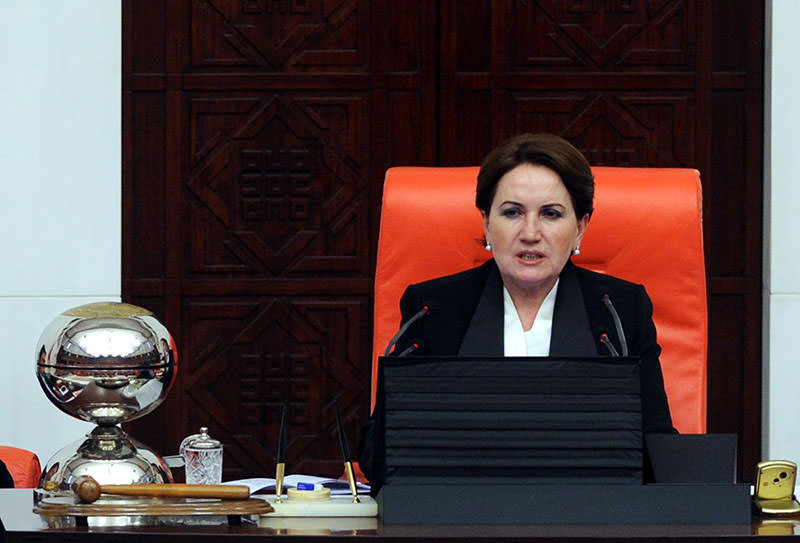 Nationalist Movement Party (MHP) has launched an investigation into intra-party dissident figure Meral Akşener for her comments on the chairman Devlet Bahçeli, with a possible demand for Akşener's expulsion from the party.

The move came after Akşener's comments over Bahçeli in a live TV program on Friday. Asked how she would respond to the allegations that Bahçeli had described her efforts in raising voice against the chairman and seeking an extraordinary congress as being the works of the controversial Gülen Movement, Akşener said, "People had also said so of the former presidential candidate Ekmeleddin İhsanoğlu, and now they are saying the same thing for me."

"At that time, İhsanoğlu [the joint candidate of CHP and MHP for presidential elections in 2014] was the candidate of Kılıçdorğlu [CHP chairman] and Bahçeli. If İhsanoğlu is a parallel structure project [term in use for Gülen movement], then Bahçeli who has chosen him becomes the top parallel figure," Akşener said.

MHP dissidents have been very vocal after the Nov. 1 elections, in which the party barely passed the 10 percent national election threshold and lost half of its deputies compared to June 7 elections. Since then, Meral Akşener, Sinan Oğan and Koray Aydın, later joined by Vice Chairman Ümit Özdağ, have raised their voices against Bahçeli and have sought an extraordinary congress to declare their candidacy for the chairmanship.

The opposition took the issue to court, which decided on April 7 in favor of a congress and assigned three MHP members to lead the party to a congress. The MHP administration appealed the decision at the Supreme Court of Appeals.

In early 2015, Bahçeli called one of the dissidents "a political figure of the Gülen Movement."

"There is one candidate who joined the MHP as a political figure of the Fethullah Gülen Movement," he said.

Even though Bahçeli did not cite her name, Akşener dismissed the claim, saying: "I have no connection to the Gülen Movement. I would have proudly said if I had."

Her remark was interpreted by some as a sign of her connection to the controversial movement.

Led by Fethullah Gülen who lives in a self-imposed exile in the U.S., the Gülen Movement, referred to as Gülenist Terror Organization / Parallel State Structure (FETÖ/PDY) in official documents, is being probed for planning a coup against the government through investigations launched by its members in the police and judiciary using fake documents and illegal wiretappings.