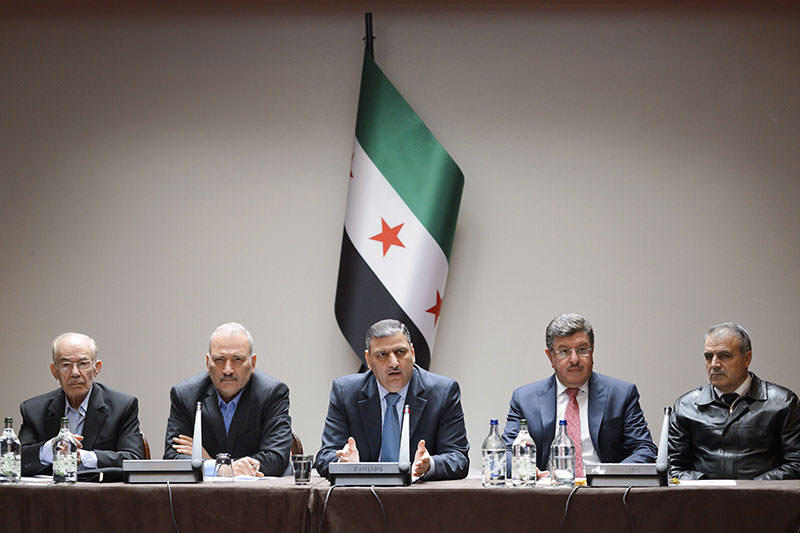 Syrian opposition chief negotiator Asaad Zoubi urged opposition fighters to retaliate against attacks by the Syrian army, accusing the Assad regime of using a cessation of hostilities to gain ground.

In a message to fighters on the ground, Zoubi said he would not long continue with negotiations in Geneva if government aggression continued and there was no progress on a key demand by the opposition for a political transition in Syria that would phase out the regime lead by Bashar Assad. He gave no deadline.

"We will not stay forever negotiating... If a missile targets them, they have to retaliate with 10 missiles and to exploit the truce just as the regime has done," said Zoubi.

The mainstream opposition includes political as well as armed opposition to Assad and his regime, including rebel groups such as Jaysh al-Islam and a number of factions of the Free Syrian Army.

Representatives of the Syrian opposition High Negotiations Committee (HNC) said indirect negotiations could collapse if the regime refuses to compromise on political and humanitarian issues.

"We might suspend [participation in] the talks if things carry on this way, and then there will be no prospect for any political solution," said HNC member Abdulhakim Bashar.

Syrian regime representatives and the HNC arrived in Geneva last week for a fresh round of talks, held by U.N. special envoy Staffan de Mistura.

The opposition HNC has questioned the regime's commitment to a political solution to Syria's five-year civil war, particularly in the wake of renewed violence in the northern province of Aleppo. More than 270,000 people have died so far in Syria's war, and millions more have been displaced.

Syrian opposition groups announced a new battle against the regime on Monday, a sign of escalating violence that has undermined a cease-fire deal and threatens to derail U.N.-led peace talks. The groups, which included factions fighting under the banner of the Free Syrian Army and the powerful Islamist Ahrar al-Sham, said in a statement they would respond "with force" against any regime forces that fired on civilians.

The cease-fire deal has been strained to breaking point by the escalating fighting, particularly around the divided city of Aleppo, with each side blaming the other for attacks that have underlined the huge challenge facing the peace talks. Heavy airstrikes have been reported north of Homs.

Senior opposition figures who have asked not to be quoted have said pressure is growing for a speedy decision to leave the talks in Geneva, with no sign of progress towards the discussion of the political transition sought by Assad's opponents.

The statement announced the "formation of a joint operations room to begin the battle... in response to violations by the army of Assad." It gave no geographic location for the new battle.

The cessation of hostilities agreement brokered by the United States and Russia came into effect on Feb. 27 with the aim of allowing peace talks to get underway. The cease-fire agreement did not include DAESH or the al-Qaida-linked Jabhat al-Nusra.

Human Rights Watch (HRW) said on Friday that at least 30,000 civilians have fled fighting in northern Syria and are headed towards the Turkish border. HRW said many of those fleeing were residents of emergency camps set up along the border now headed for other camps or nearby towns and villages, even though these were still not secure.

The United Nations Office for the Coordination of Humanitarian Affairs (UN-OCHA) has estimated that up to around 23,000 displaced people are fleeing a DAESH offensive in northern Syria.

It said many displaced were now "in close proximity to the front lines, and therefore extremely vulnerable to further escalations."

This crisis comes amid an escalation in fighting around the provincial capital Aleppo between forces loyal to the Russia-backed Assad regime and the U.S.-supported moderate opposition. This conflict threatens the nearly seven-week-old cease-fire agreement that saw violence drop significantly for the first time in the five-year conflict. DAESH and other terrorist groups are excluded from the truce.

As Syria's northern neighbor, Turkey has offered refuge to more than 2.5 million Syrians over the past five years, and still faces a continuing stream of refugees. Due to an increase of refugees and internally displaced people due to Russia-backed regime offensives in northern Syria, Ankara is trying to handle the humanitarian aspect of the crisis. With nearly $9 billion spent on humanitarian aid during the ongoing Syrian crisis, Turkey's spending on support for Syrian refugees has been 20 times more than foreign assistance received through international organizations, according to the Prime Ministry Disaster and Emergency Management Authority (AFAD).