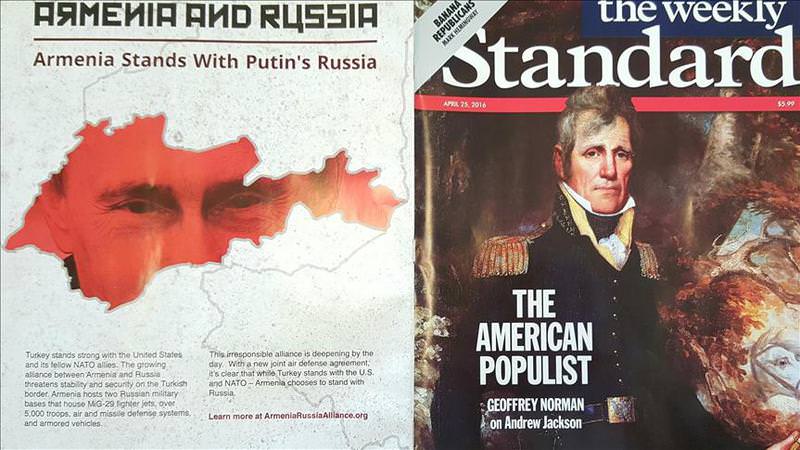 Growing Russian-Armenian cooperation threatens stability and security along Turkey's border, according to ads in leading U.S. publications Tuesday by a Turkish American group.

The advertisements by the Turkish Institute for Progress come ahead of the April 24 anniversary of the 1915 events and seek to stir up public support against a lobbying campaign by the Armenian diaspora that aims at getting the White House to label the tragic events during World War I in eastern Turkey as "genocide".

Russia has two military bases in Gyumri and Erebuni provinces of Armenia where Mig-29 fighter jets, more than 5,000 troops, air and missile defense systems are stationed.

The ads, "Armenia and Russia: Armenia stands with Putin's Russia" said that "this irresponsible alliance is growing by day," and that "with a new joint air defense agreement it is clear while Turkey stands with the U.S. and NATO, Armenia chooses to stand with Russia."

Russia and Armenia inked an agreement for the joint air defense last December.

In another ad, the organization said stability in the Caucasus is among global priorities.

"One destabilizing and troubling trend is the growing alliance between Armenia and Russian Federation President Vladimir Putin," it said.

The advertisements were published in the Wall Street Journal, Washington Post, The Hill, Weekly Standard's Tuesday issues as well as the New York Times and on Politico's website.

Turkey does not dispute that there were casualties on both sides, but rejects calling the events "genocide." Instead, it calls for a joint commission of historians to be established and archives to be opened in order to study and uncover what happened between the Ottoman Empire and its Armenian citizens.