Survey: 55 percent of MHP voters behind Bahçeli in face of opposition 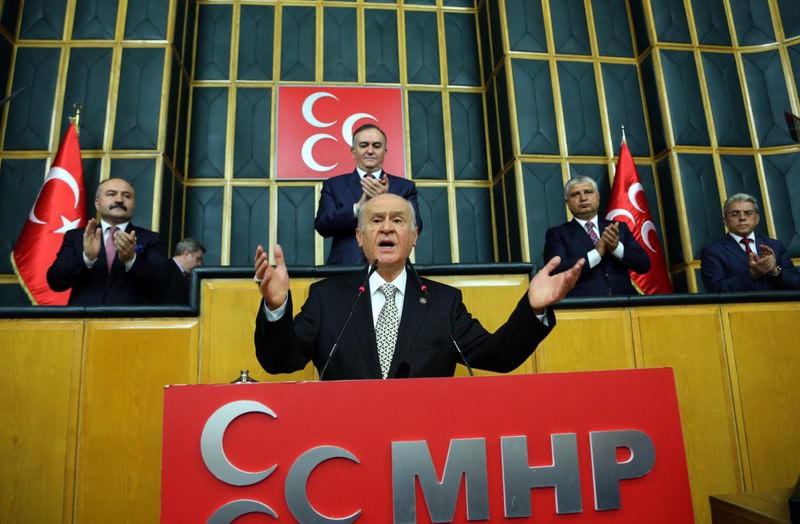 Amid the intra-party conflict, a recent survey found that 55.2 percent of MHP supporters want current Chairman Bahçeli to stay as the party leader and 51 percent said that Akşener, who has been accused of having links to the Gülen Movement, should be discharged from the party

The MHP recently launched an investigation into Akşener following her comments against Bahçeli in which she described the current party leader as the top "parallel" figure when responding to allegations by Bahçeli claiming Akşener's efforts for an extraordinary congress as being the work of the controversial Gülen Movement.

"We have no party to hand over to the 'parallel [structure],' " Bahçeli said last week, adding that the date for a congress is March 18, 2018. Claiming that the Gülen Movement wants to design Turkish politics through the MHP, Bahçeli contended that it will never reach this goal. "I see people who scream out with joy. No one should have desires in this vain," he said.

Bahçeli had also claimed in a written statement on a news website late February that the Gülen Movement, led by fugitive cleric Fethullah Gülen, plans to seize the MHP chairmanship and turn it into an operational party by dragging the youth into the streets.

It was speculated that the Gülen Movement is targeting the MHP chairmanship through Meral Akşener's candidacy. Akşener, a former MHP deputy, kicked-off an election campaign-like tour in February in the western province of Denizli where she addressed dissidents and sought backing.

Even though Bahçeli did not name the "political tool," Akşener quickly dismissed the claims about her being the "tool." "I have no connection to the Gülen Movement. I would have proudly said if I had," she contended.

The ORC survey found that 51 percent of participants want Akşener to be discharged from the party, 33.5 percent of respondents said she should receive a warning and 15.5 percent said no action should be taken.

Participants were asked whether they support reintroducing the death penalty for crimes such as rape, treason and/or terrorism, which received 90 percent approval.

Regarding lifting parliamentary immunity, 76.9 percent of respondents said they support the Justice and Development Party's (AK Party) motion that was presented to Parliament.

The survey also asked about Turkish-EU relations and found that 72 percent of participants still believe Turkey is strong and has a strong voice in the international arena. Eighty percent said that they did not care about Turkey's EU accession, and 88.1 percent said they do not trust the EU.
RELATED TOPICS