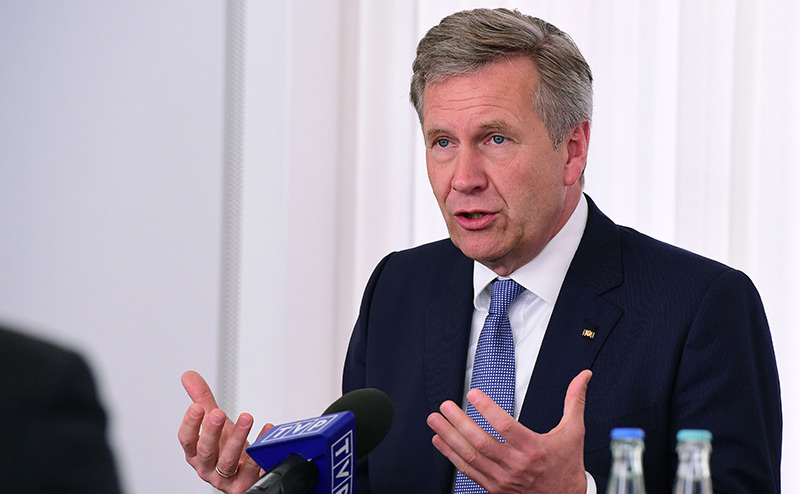 Former German President Christian Wulff spoke against growing anti-Islam sentiment in the country and stressed that Islam belonged to Germany, contrary to what far-right parties claim.

"When 3 million Muslims live in our country, they belong together with their religion Islam to our country, " Wulff said Thursday in Berlin at the Foreign Correspondents' Association in Germany (VAP).

He sharply criticized the draft party program of the right-wing populist Alternative for Germany, AfD, Party, which warned against the "Islamization of Germany" and called for the banning of Muslim symbols, including minarets.

The Christian Democrat politician opposed such calls and said Germany's constitution guaranteed religious freedoms for all, including the right of Muslims to freely practice and teach their religion, and build their mosques.

"Whoever says I do not want any Muslim in Europe, he or she also cannot campaign for the rights of Christians in other parts of the world, and should not be surprised if others there say we don't want Christians (…) or Jews here," he added.

The right-wing populist Alternative for Germany, which has seen growing public support in recent months, has adopted a stronger anti-Islam stance, making it one of its central issues.

One of the party's deputy leaders, Beatrix von Storch, told local media Sunday that Islam was a "political ideology" that is not compatible with the constitution.

Wulff, who served as president from 2010 to 2012, was the first leading German politician, who publicly acknowledged that Islam belonged to Germany, as much as Christianity and Judaism.

His speech in 2010 had sparked a massive debate, but was later supported by Chancellor Angela Merkel.

Wulff underlined that contrary to the claims of right-populists and extremists, immigrants and Muslims have had significant economic and cultural contributions to the German society.

"We have many migrants, also many Muslims among our intellectuals, in the fields of media and culture, who are representing our country," he said.

Germany took in 1.1 million refugees last year, most of them Syrians, Iraqis and Afghans who fled wars and conflicts. The numbers have put a strain on local authorities and triggered anti-refugee sentiments.

Germany has the second-largest Muslim population in Western Europe after France. Among the nearly 4 million Muslims in the country, 3 million are of Turkish origin. Many of them migrated to Germany in the 1960s.