Turkey's new constitution to be based on libertarian rather than authoritarian secularism, PM says 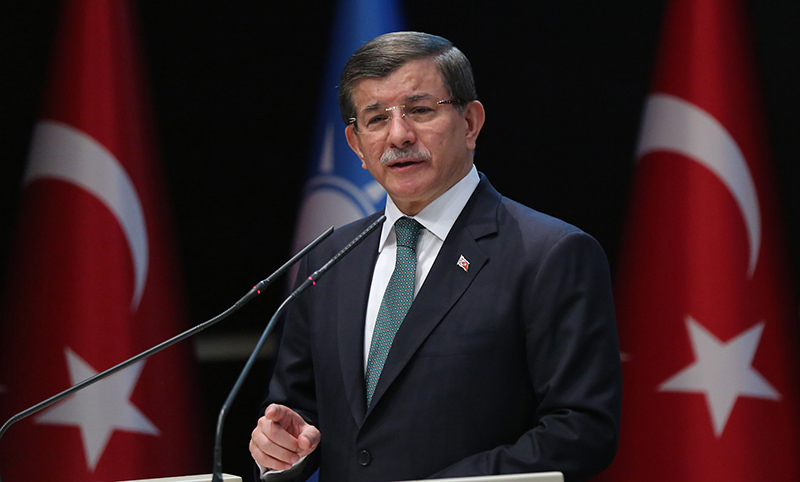 Prime Minister Ahmet Davutoğlu said on Wednesday that the Justice and Development Party (AK Party) will start to draft a new constitution that includes secularism based on libertarian principles rather than authoritarian values.

Speaking at the AK Party's Extended Provincial Chairmen meeting in Ankara, Davutoğlu said there have been comprehensive discussions with academics and opinion leaders within the party this month on a civil constitution that will also include a presidential system.

"Eventually, through appointing the committee drafting this constitution depending on both those consultations and the AK Party's previous experiences, we will start drafting activities this week," he said.

He pledged that the AK Party's draft constitution would guarantee secularism and dismissed claims that it would not include secularism, saying it is out of the question to debate the nature of the Turkish state as anything other than a secular democracy with the rule of law.

"We will propose a libertarian sense of secularism rather than an authoritarian one," Davutoğlu said, and added that the party is aware that they are preparing Turkey's first civilian constitution and it emphasizes and respects human dignity.

He said the draft constitution would guarantee religious freedoms while it would ensure that the state has equal distance from all religions and faiths.

"We do not think that it is right to make any sort of speculation regarding this matter," Davutoğlu said, before adding that the secularism debate, sparked after Parliament Speaker İsmail Kahraman said the country shouldn't be secular, has ended for the AK Party.

Senior AK Party officials voiced their support for secularism, arguing that the new draft constitution readied by the AK Party committee retained the principle of separation of state and religion to ensure Turkey enjoys the full benefits of a democratic system of government.

The chairman of the AK Party's Constitution Commission in Parliament, AK Party Istanbul Deputy Mustafa Şentop, said Tuesday that the AK Party commission will maintain secularism in its draft constitution and excluding it is out of the question.

AK Party Group Deputy Chairman Bülent Turan also said on Tuesday that the party's stance regarding secularism is "quite clear."

AK Party spokesman Ömer Çelik also said on Tuesday that it is out of the question for a new constitution proposal to not have secularism as a principle, as he noted secularism, democracy and the rule of law are some of the main values that the AK Party defends.

The debate on a secular constitution started when Kahraman expressed his view that secularism should not be included in the new constitution because Turkey is a Muslim-majority country.

Turkey is preparing to reform the current Constitution, which was drafted after the Sept. 12, 1980 coup and creates a variety of impediments to legislation.