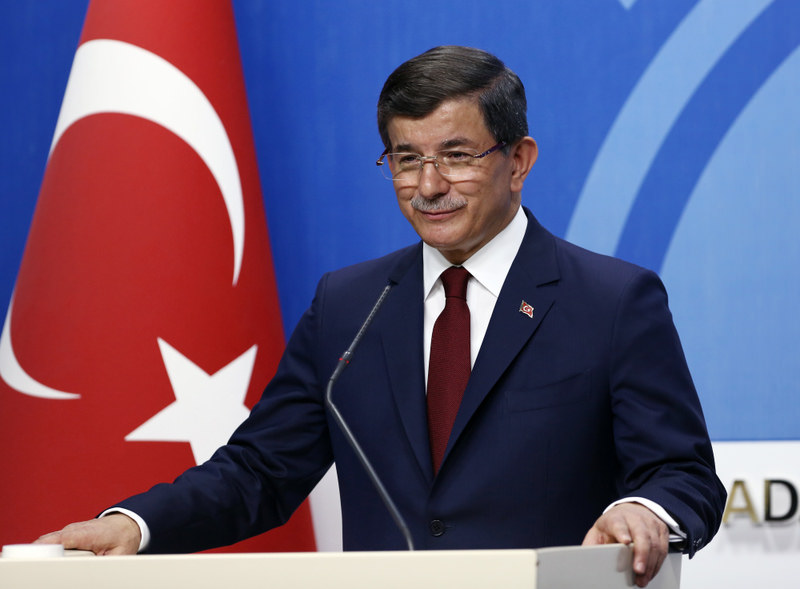 PM Davutoğlu announced Thursday that the AK Party will hold an extraordinary congress on May 22 to elect the party's new chairman. He also pledged loyalty to President Erdoğan and vowed to not speak ill of him in the future

Prime Minister Ahmet Davutoğlu announced in Ankara on Thursday that the ruling Justice and Development Party (AK Party) will hold an extraordinary congress on May 22, explaining that he will not run for the leadership. Speaking to the media on Thursday, Davutoğlu also pledged that strong AK Party governments will continue to work over the next four years. He further criticized speculation about his relationship with President Recep Tayyip Erdoğan and stressed, "I will not tolerate any speculation about my relationship with President Erdoğan. My loyalty to the president will last until the end." Davutoğlu began by saying that he had received the "custody" of the chairmanship position from Erdoğan in 2014 during an extraordinary congress, and stressed that his 20 months as prime minister and AK Party chairman can be divided into three periods. He said that there have been no intra-party disputes and no changes to the party's structure and backbone. Davutoğlu said: "The first period, from Aug. 28, 2014 to June 7, 2015, is the most significant period when the AK Party was wholly prepared for its future following a charismatic leader." He continued that the second period was about successfully moving the government toward the elections and the third period was dominated by national security concerns.

Speaking about the government's work on a new constitution, Davutoğlu said: "We have taken all the necessary steps and established all the relevant institutions to realize one of our biggest reforms – a civil-based constitution that is libertarian and written with the peoples' will [in mind]." He stressed that the new draft constitution will be finalized soon. He said that Turkey has been conducting extremely successful and comprehensive anti-terror operations and that the strong AK Party government will continue to work over the next four years.

He said that he has "worked day and night to rightfully fulfill his duties while AK Party chairman and prime minister." He strongly dismissed all claims that he intervened in the appointing of provincial organization heads. "The AK Party is entering a new era," he said, adding that the public's questions of why he is leaving his post despite getting 49.5 percent of the vote while opposition parties had repeatedly failed need to be asked. However, Davutoğlu said: "I have principles that I have never abandoned since my academic career. I have never requested or lobbied for any positions throughout my career. I have never been in a relationship based on a position, title or vision. I have always wanted to be assured that the companions I am on the road with are on the same side as me. With this perspective, I was the first to sign the proposal during the last MKYK [Central Decision and Executive Board] meeting." He said that following intense consultations he decided it is better for the party chairmanship to change rather than companions, adding that "the AK Party's destiny is Turkey's destiny."

Finalizing his remarks by emphasizing that he does not hold any grudges, hatred or complaints, he said the decision to step down as party chairman and prime minister was "not a choice, but out of necessity," and added: "I think that it is right to step down for the continuity of the AK Party's unity and solidarity."

Although Davutoğlu did not give any hints about who would be the next AK Party chairman and prime minster in his remarks, many were astonished by the recent developments in the AK Party. Davutoğlu had signaled his decision to resign following the latest MKYK meeting on April 29 at which Davutoğlu's authority to appoint AK Party provincial and district heads was revoked and returned to the MKYK as they had been in 2002.

The latest MKYK meeting, which was planned to start at 10 a.m. and was delayed five-and-a-half-hours due to Davutoğlu's delayed return from an official visit to Qatar, had agreed on the decision with 47 members' support with Davutoğlu placing the signature on the document first. Although this decision was initially taken as a surprise, according to the AK Party's bylaws the authority to appoint local party heads originally belonged to the MKYK until it was given to Erdoğan while he was prime minister. Speaking to media members following the MKYK meeting, the AK Party's spokesman Ömer Çelik responded to claims of an intra-party crisis and said: "If a crisis takes place, I'll be telling you." He further said: "It is not right to approach this as a radical stance. Our relationships in the MKYK, the MYK [Central Executive Board] and in other bodies are based on the rules of union. It is often asked whether there is a crisis, but the AK Party's MYK, MKYK and the Cabinet are a single piece and a whole. There is no crisis."

With increasing speculation over a rift between Davutoğlu and Erdoğan, Davutoğlu stressed the party's common cause during the AK Party's parliamentary group meeting on Tuesday. He said: "I'll step aside if necessary. I could turn away from any position that people think a mortal could not leave. But I will never break any of my friends' hearts in this holy movement." He added: "I wouldn't allow this clean movement and its clean-hearted staff – the only hope of the oppressed all around the world – to become sad."

In addition to the MKYK meeting and the party's parliamentary group meeting, Davutoğlu's meetings with Erdoğan that customarily happen on Thursdays happened on a Wednesday. It was described as ordinary by many political circles until the unofficial announcement of an extraordinary congress. Shortly after the meeting ended, the decision that Davutoğlu would hold a press conference was announced to the media, which made it clear to the public that Davutoğlu would resign.
Last Update: May 06, 2016 11:59 am
RELATED TOPICS