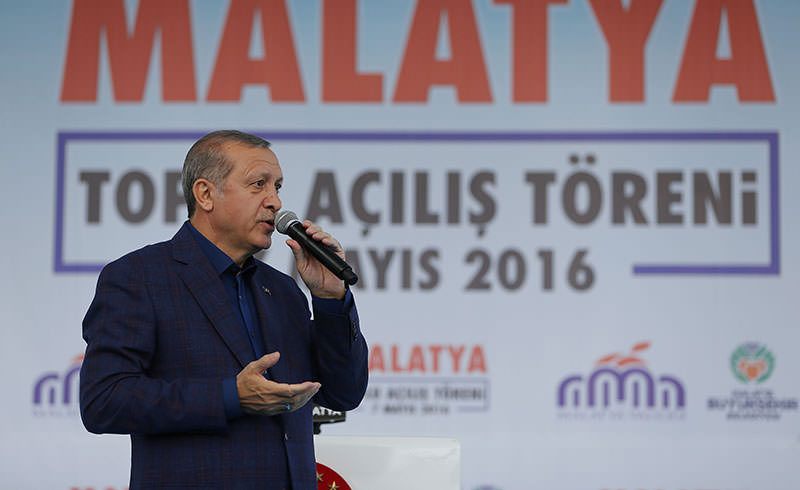 President Recep Tayyip Erdoğan on Saturday accused European countries of hypocrisy in pressuring Turkey to change its terror laws while "sidelining democracy" at home in their own fight against terrorism.

"Those who criticize us are reduced to sidelining democracy and freedoms when bombs started to explode on their soil," Erdoğan said in a speech in the southeastern city of Malatya.

Last week, the European Commission said Turkey had to meet five objectives, including changes to its anti-terror law, to gain visa-free travel to its passport-free area under a deal to curb the influx of migrants to the European Union.

The PKK, which has been carrying out terrorist attacks in Turkey, is recognized as a terrorist organization by Turkey, the European Union and the United States.

"The EU is telling us to change our law on combatting terrorism. [They] are allowing terrorists to raise tents and then [they] come with requirements" Erdoğan had said in a televised speech in Istanbul on Friday.

Saturday's swipe followed on the heels of another combative speech in which Erdoğan warned Turkey would not change its panoply of anti-terror laws.

The EU has a list of 72 criteria for pushing through visa-free travel for Turkish nationals under the landmark.

Five of these "benchmarks" remain outstanding, according to the EU executive's assessment. The 28 EU member states and the European Parliament must also approve the visa scheme.

Turkey has previously warned Brussels that Ankara would stop fulfilling its side of the migrant deal -- which has seen the numbers making dangerous crossings across the Aegean Sea fall sharply -- if the EU's promises are not kept.